The starter motor is an electric motor that rotates your car's engine. This allows the spark and fuel injection systems to begin the engine's operation under its own power. It is mounted to one side of the vehicle's transmission bell housing where it connects to the engine itself. This post will explain more about starters, including these starter motor facts: 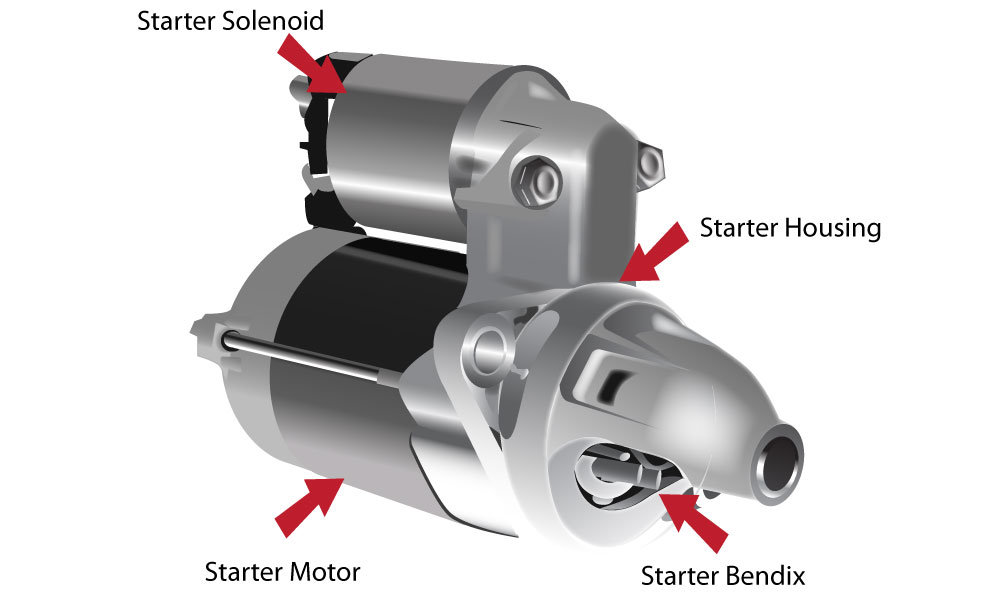 The History Of Starter Motors

Starter motors of various types have been used almost as long as the internal combustion engine. Starting a typical automotive or aircraft engine by conventional, physical means (turning a crank or propeller, in most cases) was an inconvenient, dangerous, and physically demanding job. The first automobile electric starter appeared in 1896 on an Arnold. Cadillac made it standard equipment on their models in 1912. By 1920 they were standard on nearly all automobiles. Chrysler added the key switch we're familiar with today in 1949, before which starters were usually button-activated.

The starter operates as part of the engine's starter circuit or ignition circuit. It is supplied power from the starter solenoid,  which has two jobs, described below. The starter itself is a powerful electric motor, either of permanent-magnet or series-parallel wound type. The amount of power fed to it would easily burn it out after a few minutes of operation but allows it to safely crank very hard for a few seconds at a time.

Here's how it works in most vehicles:

If you experience issues with your Toyota and it won't start, here's a handy guide for troubleshooting tips. If you're starter seems to be the culprit, this post will hep you be sure.

In many cases, starter issues can be similar to battery issues. This guide on charging and jump-starting a battery can help you get back on the road if you have a dead battery or need to rule out battery issues.

Where To Buy A Starter Motor For Your Toyota

If you need a new starter motor or solenoid, Olathe Toyota Parts Center is the best place to buy an OEM starter for your Toyota car or truck. We sell genuine Toyota parts at wholesale prices and offer fast shipping. We also offer resources like starter motor replacement tutorials, a free Toyota VIN decoder, diagnostic info for common Toyota trouble codes, and a wide variety of resources just for Toyota and Scion owners.