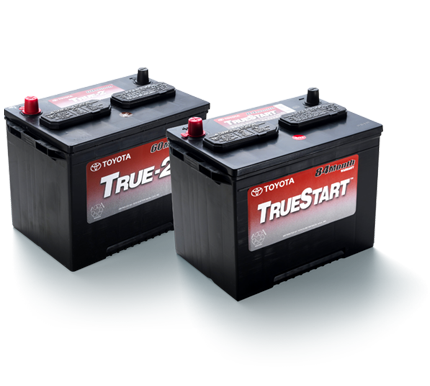 It always happens at the worst possible time: your battery dies and your Toyota refuses to start. Maybe you left your lights on overnight (it happens to all of us at some point), or maybe it’s not holding a charge very well. Here’s what you need to know about charging or jump-starting your battery.

If you have one of these on hand, you’re probably a very prepared person — if not, go get one before you need it! To determine the type of charger you’ll need, you need to figure out what kind of battery you have. It will be stamped somewhere on the battery, and will either be:

Pick a charger that’s meant for your battery type, then set it aside just in case. When the time comes, you hook the charger up to the battery, plug the charger into the wall, and you’re good to go. Be sure to check the charger’s manual to make sure there aren’t any special steps, and never place the charger in your vehicle (it must be separated from the vehicle). Generally, charging a battery takes 12-24 hours, only more expensive chargers are faster (the more you pay, the more charging power you get, generally speaking).

If you’re trying to maintain a battery for an extended period, you may want to remove it from the vehicle. If you’re charging a “wet” or “flooded” battery, it’s important to check fluid levels and leave the caps off so you can refill (and so they can ventilate properly).

Finally, whenever you charge your battery, it’s a good idea to clean the terminals. Most of the time, a simple battery post cleaning tool is all you need to remove any corrosion and create good contact between the battery and your cables.

NOTE: Most battery chargers will work for all types of lead-acid batteries except gel cell batteries, which must be charged at a slower rate to avoid damage. Gel cel batteries are somewhat uncommon…if you think you have a gel cel, you may actually have an AGM battery. Be sure to check carefully. 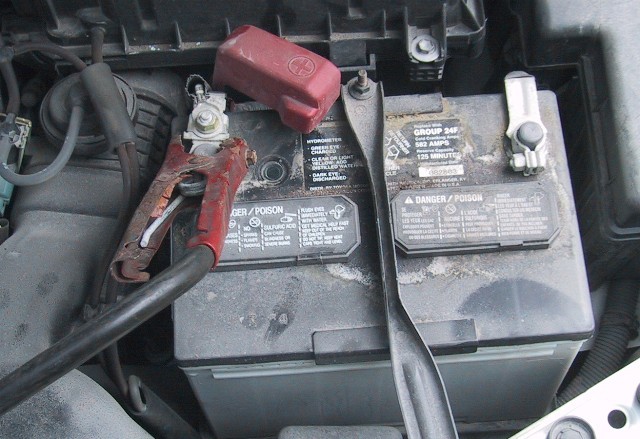 If your battery is dead in a parking lot, or you don’t have a charger and need to go, this is a quick fix. Sometimes, it’ll be okay after you’ve run it dead by leaving the lights on one, maybe two times, but chronically letting your battery drain will kill it over time — probably taking the alternator with it too.

Here’s how to jump-start a car: 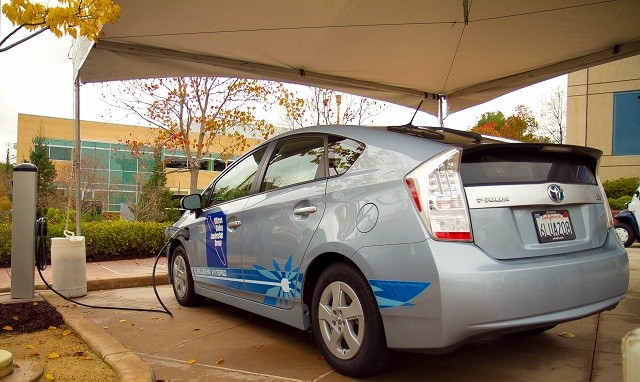 Warning! Don’t allow the clamps to come into contact with any other piece of metal except the designated/specified areas. Be sure to follow each step correctly as there is a chance of shock if done incorrectly.

You should have power now, if you don’t, consult your local Toyota repair shop.

When Do You Need To Buy A New Battery?

If your battery is running dead time and time again, you’re putting a lot of stress on the ignition and alternator — you’re also risking power surges during recharge that could fry your electronics, fuses, and even bust bulbs in the headlights. The simplest way to tell if your battery is toast is to use a voltmeter when the car is running and being revved to see what kind of output you’re getting. The reading on a voltmeter should be between 13.5 and 14.4 volts, any lower and its replacement time.

Your battery is easy to replace — you should never let it get to be such a problem that you’re parking beside cars with drivers who look nice enough to lend a charge each time you go to the store. Not only is it an inconvenience, but you’re also risking damage and wear to other parts as well. Once your battery has died, check it with a voltmeter after you get your car running again. Get a new Toyota battery and swap it out as soon as you determine that it’s done for.