Hybrid Synergy Drive is Toyota's proprietary gasoline-electric hybrid system for automotive. It is a combination of a gasoline engine and electric motor, along with other peripheral components, to power a car. It differs from other hybrid systems in that it is a fully hybridized system, meaning it allows either the electric motor or the combustion engine to power the vehicle, but also allows both to be engaged simultaneously.

Most hybrid vehicles allow either just one (as inthe Chevrolet Volt) or either one or the other separately to operatethe car, but not both at the same time. Thus, Toyota's HSD allows the car to drive in electric-only mode (EV), combustion-only mode (gasoline), or both (hybrid). An engine management system unique to the HSD controls which propulsion source is moving the vehicle in a given driving scenario. 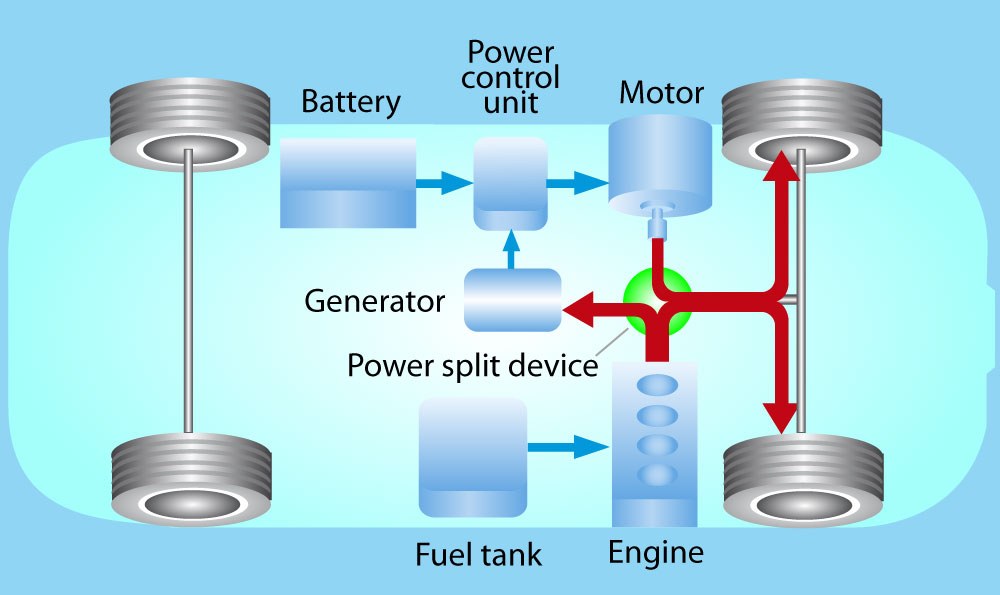 The secret to the control of propulsion source in Toyota's hybrid system is in its electromechanical transmission, called an e-CVT or electronic continuously variable transmission. This system is not really a standard CVT as most would think of it, however, and has little in common with the simple and elegant design of a Reeves Drive. Instead, this system uses has two power input sources that can be synchronized in the transmission through a planetary gear set that blends the input from the engine and motor before giving it to the CVT's output shaft through more gearing. What makes this geared transmission operate like a CVT, however, is the use of electric motors in the mix, which gives a different speed control dimension to the process.

The transaxle's planetary gear set adjusts torque from the engine and motor as needed by the front wheels. One motor is mounted on the drive shaft itself (referred to as the Primary or MG2), providing a torque boost to the wheels and also acting as a brake regeneration generator when the wheels slow during braking. The drive shaft from the engine has a second differential with two legs, one to the engine and one to another electric motor (referred to as the Secondary or MG1). The MG2 also acts as the vehicle's starter motor. The differential relates engine speed with wheel speed, absorbing the different from one or the other through an epicyclic gear set ('power split device'). All of this is contained in a single housing situated to create front wheel drive on the vehicle, usually bolted to the engine as any other transmission would be.

When the engine is engaged in driving, the Secondary motor uses the turning power of the engine, through their shared differential, to generate electricity to recharge the battery pack and add power to the boosting effect of the primary motor.

The hybrid synergy drive system works through computer controls which dictate the amount of power being sent to each motor from the vehicle's batteries. These are controlled in such a way as to augment the operation of the combustion engine, though they can sometimes be used to supplant it in all-electric operations ? usually at low speeds. These tools make the combustion engine more efficient and also allows for its downsizing.

In most Toyota vehicles with HSD they use: