In automotive systems, a radiator is the heat exchanger used to transfer heat from the engine to the atmosphere. A typical automobile actually has several radiators on board, though most of them will not be called that. The heater core in your passenger cabin for heating the interior of your car is a small radiator, as is the radiator often used to cool engine oil as it passes through towards the oil pan (sump).

Specifically, though, the term "radiator" in automotive describes the large unit that cools the engine's coolant (often called water or anti-freeze).

Radiators themselves are simple devices that have no moving parts and work on very simple physical principles. They are an integral part of the engine's overall cooling system.

How the Cooling System Works 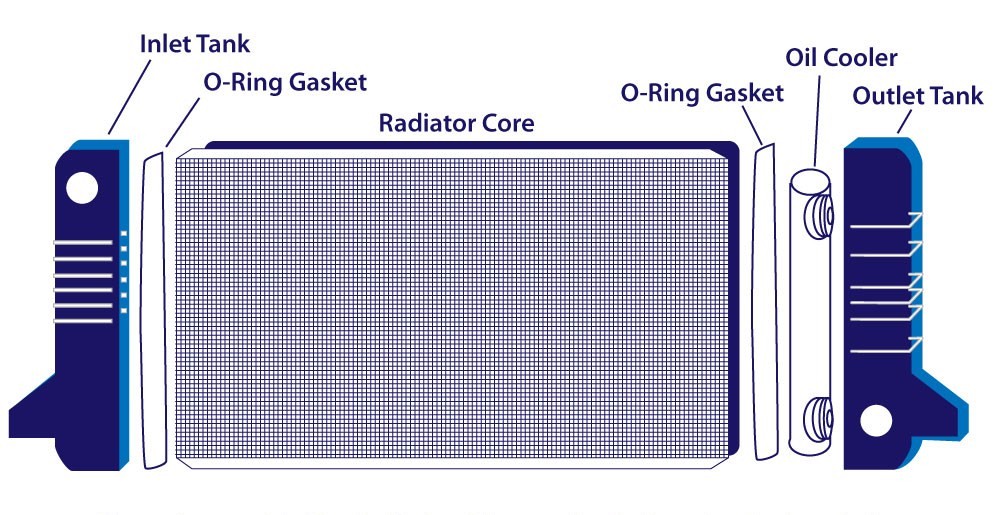 The cooling system in a typical combustion engine, including gasoline- and diesel-powered engines, is a simple circuit of water flow through the engine's block (central core). Coolant is constantly inside the engine, circulating around by means of a water pump that moves it through the engine, top to bottom, forward to back. When the engine is cool, the water (an excellent and cheap liquid thermal conductor) flows in a circle without leaving the engine core. When the engine heats up, the water is diverted by valves made to detect heat (thermostats) into the radiator for cooling, then returned to the engine to continue circulation. Another valve allows the hot coolant to be sent through the heater core in the passenger cabin before returning it to the engine.

This circuit continues every time the engine runs, so long as the water pump functions. It's for this reason that even on today's sophisticated, modern engines with all of their electronics, the water pump is nearly always powered mechanically rather than electronically. It is integral to the continued operation of the engine.

How the Radiator Works

The radiator in this circuit is the most visible and important part of the engine's cooling system. When the coolant in the engine becomes hot, it causes the thermostat to open its valve, letting the coolant out and into the top of the radiator. From there, it circulates down in a serpentine fashion, right to left, to the bottom of the radiator, where it returns to the engine via the water pump inlet.

As the water moves down through the radiator, it passes through small-diameter pipes (usually made of copper) that are surrounded by and connected to thin aluminum fins. Aluminum is a high-efficiency thermal conductor, so the heat from the water is quickly pulled off as ambient, cooler air passes over the fins and "pulls" it away. This cools the coolant, which is then sent back into the engine to pick up more heat and repeat the process.

Although radiators are simple, they can leak or become clogged. The thermostats that control the water flow into and out of them can also malfunction. When a vehicle is scrapped for parts, the radiator is often pulled for its high recycle value in copper and aluminum as well.

Signs of radiator issues include: