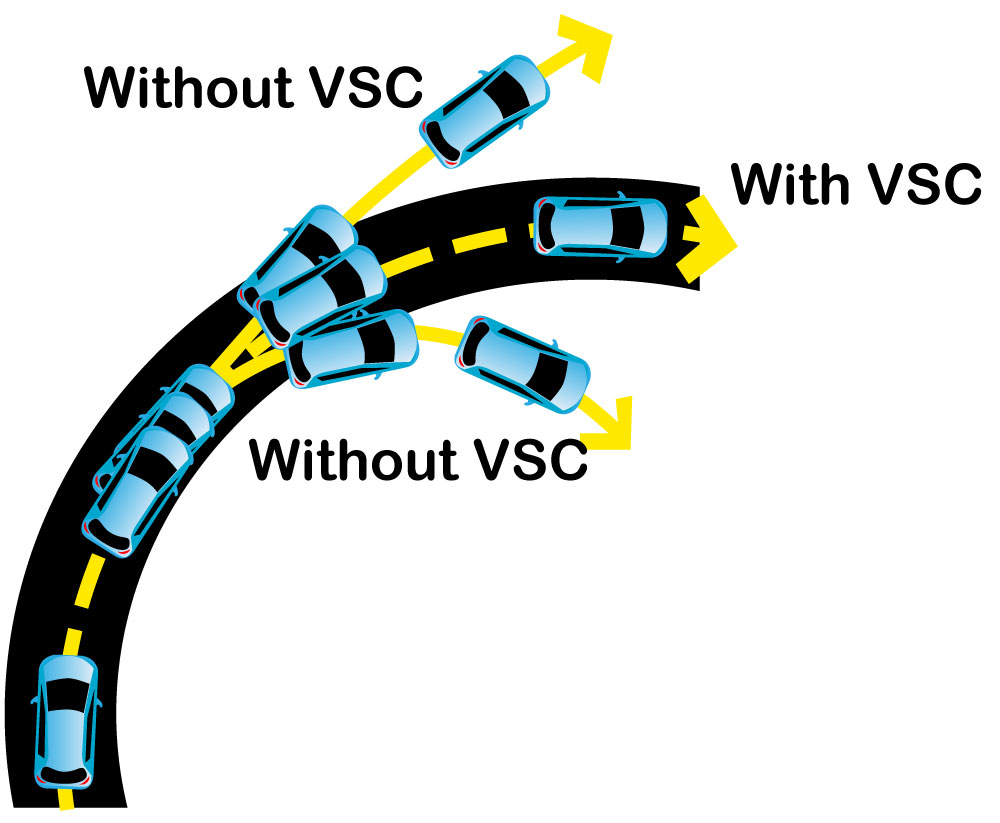 About one third of fatal traffic accidents could be avoided if a VSC system were employed, according to both theInsurance Institute for Highway safety (IIHS) and the National Highway Traffic Safety Administration (NHTSA). As of 2009, ESC is mandated in vehicles of 10,000 pounds gross vehicle weight or lower sold in the United States on a rolling scale with all vehicles of this size being required to have it after November, 2013.

ESC and VSC first appeared in production vehicles in 1995. It was introduced simultaneously that year by Mercedes-Benz, BMW, Volvo and Toyota. Suppliers included Bosch and ITT Automotive (now owned by Continental Automotive). By the end of 2009, both Ford (which gained their ESC from Volvo) and Toyota had made ESC/VSC standard in all vehicles sold in North America, with Toyota rolling it into all of their brands (including Scion) by 2011.

Most commonly, VSC will engage during misjudged cornering (understeer or oversteer due to excessive speed), evasive swerves, and hydroplaning. It operates on all driving surfaces and has proven effective as a means of maintaining vehicle control and reducing accidents.

The system works through a combination of vehicle sensors, control of the anti-lock braking system (ABS), and traction control systems (TSC/ASR) for drive wheels. Unlike these individual systems, VSC considers input from the driver to add stability or correct for steering loss.

The VSC computer, usually located in the vehicle's main fuse box or as part of the ABS system computer, continuously measures yaw (rotation around vertical axis, or left-right spin), individual wheel spin rates, and traction. On most Toyotas with VSC, four sensors are incorporated in this system:

Some larger vehicles will also include a roll rate sensor for rollover prevention. Input from these sensors determines what the VSC is to do, if anything, based on the computer's comparison of data with a total vehicle "state space" (equations used to model vehicle dynamics in real-time). Commands are issued appropriately to vehicle components such as the ABS. A hydraulic modulator in each wheel measures and dynamically adjusts brake pressure individually to the wheel according to instructions from the VSC computer. The driver's steering wheel angle as well as traction sensing is used to determine the amount of correction required.

The VSC "Off Switch"

Most sport models of vehicles and some offroad-capable vehicles will have switches to allow the driver to disable VSC. In many sport driving conditions, such as on the track, in rally driving, and some hard offroad applications, VSC can interfere with advanced driving techniques. Corner drifting, for example, common in both track and dirt GT driving, is countered by VSC and thus counterproductive to the sport driver's wishes. Lateral sliding is also sometimes used as a maneuvering tool in offroad driving as a means of avoiding obstacles or gaining traction.

In addition, on some vehicles, the VSC may interfere with the use of a smaller spare tire, which will often give a different wheel spin rate than the other wheels on the car. Some newer Toyotas will compensate for a small spare automatically, however, if the sensed difference is constant (as it should be under normal driving). VSC is also automatically disabled when any of the four wheel speed sensors is disabled, so many shop and tow truck service persons will unplug the wheel speed sensor on the wheel onto which the spare has been temporarily mounted.