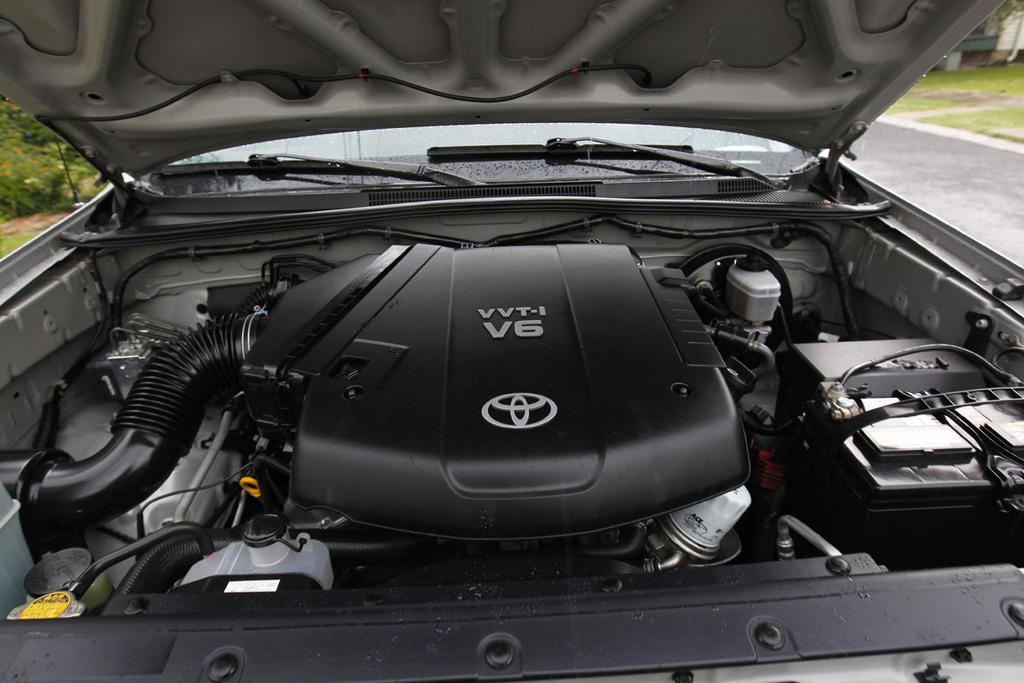 Toyota's Variable Valve Timing with Intelligence (VVT-i) is the company's latest-generation variable valve timing (VVT) for engine modulation and control. VVT itself was introduced in 1991 in the 4AGE engine, which features 5-valves per cylinder, and a two-stage, hydraulically-controlled cam phasing system and it quickly proliferated to most of Toyota's engine lineup. VVT-i came soon after, entering the market in 1996 by adding intake valve timing to the VVT's cam phasing, becoming the norm in most of Toyota's engine lineup today.

Variations of VVT-i include:

Why Vary the Lift and Timing?

Introducing VVT to a combustion engine allows for more precise control of engine output and can greatly increase fuel economy. Most VVT is measured in early and late valve opening and closing. Closing intakes later, for example, can result in reduced pumping losses in partial load conditions, which reduces nitric oxide (NOx) emissions while only marginally affecting torque output. By contrast, early intake valve closing has the same effect at higher vacuum, but also improves fuel economy by up to seven percent.

Similarly, early intake valve opening reduces most emissions and improves fuel economy due to the improvement in volumetric efficiency the process includes. When opening early, the valve will send hot exhaust through the intake valve where it is momentarily cooled in the manifold before returning to the cylinder in the next stroke. This process is also called valve overlap.

Early/late exhaust valve closing can combine several of these bonuses into one system. As engine technologies improve and become less expensive, VVT continues to improve performance and economy. Toyota's VVT-i is the latest-generation of this technology in their engines and combines several facets of valve control.

To understand how VVT-i works, we first need to look at its underlying technology. In a nutshell, VVT alters the timing of valve lifting to improve performance and economy in specific driving situations, usually dictated by RPM ranges. The idea behind VVT has been around for nearly two centuries, being first introduced in crude form in steam engines and later becoming common in aircraft and then automotive.

In automotive, several methods of varying the valves' lift and timing have been employed. Toyota's VVT is a cam phasing system, which is one of the most common in use. It uses a variator, which is hydraulically-controlled, to change the size of the inlet and exhaust valve openings, which also affects the duration of those openings as well. In dual overhead camshaft engines, this allows the timing of each opening (inlet and exhaust) to be controlled through simple manipulation of the size of the cam lobe being used against the valve lifters.

The cam lobe size in Toyota's system is in pairs, with the shorter one being immediately next to a taller lobe. A dual system of lifter arms is used with one for each lobe. When he shorter lobe is in use, the larger lobe's lifter is "free" (unlocked) thus creating no lift as the lobe passes under it. When activated, this second lifter is hydraulically locked and the larger lobe becomes the dictation for cam lift. Hydraulics are controlled through engine rotation speed, with higher speeds activating the higher lift.

This basic technology is combined with what Toyota calls "intelligence" to improve its performance further.

Adding the "intelligent" part to VVT, VVT-i improves the timing control further by not only varying the intake valve opening and closing height and duration through the camshaft and lifters, but by further controlling the duration through change in the camshaft's rotation itself. On a duel overhead camshaft system (DOHC), this allows control of the overlap time between intake and exhaust valve closing and opening.

The system works by using a variable-speed head for the camshaft. This head, or camshaft gear, is where the timing system (belt, scissor-gear, or chain) give the rotational force to the camshaft itself. The gear head is a hollow structure in which oil pressure can be raised or lowered to allow a two-piece floating system to speed up or slow down the head's rotation in relation to the actuator.

Visualize this as a hollow, enclosed gear inside which two star-shaped gears are placed one inside the other. The outer gear is the camshaft gear's connection to the belt or chain that drives it. The inner gear connects to the camshaft itself. Normally, the two are meshed together, cog against cog, and turn at the same rate. When oil pressure is introduced, however, the gears can be separated, changing their speeds relative to one another momentarily. This increases or decreases the speed of the camshaft in relation to the engine's drive timing. That, in turn, changes the duration of the valve lifting to control intake and exhaust.

The system has been very well received by engineers and mechanics and has shown marked improvement in engine performance output under varied driving conditions and has improved fuel economy in many of Toyota's vehicles by double digit percentages.

Similar to VVT-i, Dual VVT-i adds in control of the exhaust camshaft to the VVT-i's control of intake valves. This is found in the latest-generation V6 engines, starting with the 2GRFE in the 2005 Avalon in the U.S. It is now the most common VVT system in use by Toyota, appearing in most of the LR, UR, GR, AR and ZR engine families. Several advantages are had with this system, including faster catalytic converter heating through exhaust control, compression can be minimized to improve idle economy, and the timing allowed by the VVT-i system is improved to include more variation thanks to the added control of exhaust timing.

Variable Valve Timing and Lift with intelligence is an enhanced version of VVT-i that allows control of valve lift to go with the timing control. In a DOHC engine, this is used with two lobes per cylinder that are tuned for low-RPM and high-RPM use respectively. Matching lobes appear on the exhaust side, giving eight lobes per cylinder (four valves). Unlike a conventional VVT system, however, there is only one rocker arm lifter for each lobe pair, rather than two. He rocker arm has a slipper follower mounted with a spring, which it move up and down the high lobe without affecting the arm. Toyota's tuning usually means that the lower lobe operates the rocker arm at sub-7000 RPM and the larger lobe at RPM above that. The slipper follower is controlled by oil pressure, which engages a sliding pin to lock the follower and cause it to lift the arm on rotation. It works very similarly to Honda's VTEC system. VVTL-i is no longer being used in most markets due to its inability to meet European emissions requirements. It is still in use on the Lotus Elise in the 2ZZGE and 1ZZFE engines.

Variable Valve Timing, intelligent by Electric motor is exactly the same as Dual VVT-i with the exception that an electronically-operated actuator adjust the camshaft timing on the intake rather than using hydraulic pressure to do so. The intake is still controlled hydraulically. This process is use in the Lexus line of 1UR engines. The actuator motor runs at the same speed as the camshaft and adjusts up or down to change the timing of lift. This allows more precise and more immediate control of the timing of lift and duration, but is more expensive to implement.

The Valvematic system is an oscillating camshaft design that gives a rocking motion to a partial camshaft lobe. The idea comes from steam engines and allows for continuous lift and duration adjustment, though they are not separated as in VVT-i, and remain proportional as they do in standard VVT systems. BMW and Nissan have similar systems (Valvetronic and VVEL respectively). This system is mainly used in Toyota's non DOHC engines.