Sequential manual transmissions are most well known for their use in Formula One racing, but they appear in sports cars like the Toyota MR2, some Ferrari models, and other supercars as well. They are also common on motorcycles, ATVs, and other sporting vehicles. They differ from the standard manual transmission (usually called an H-pattern transmission) in several ways, the most important of which is that specific gears cannot be chosen out of order, so in a sequential manual transmission (SMT), shifting is from first to second, second to third, third to fourth, etc. They also nearly always feature an even number of gears (5 plus reverse, 7 plus reverse, etc). 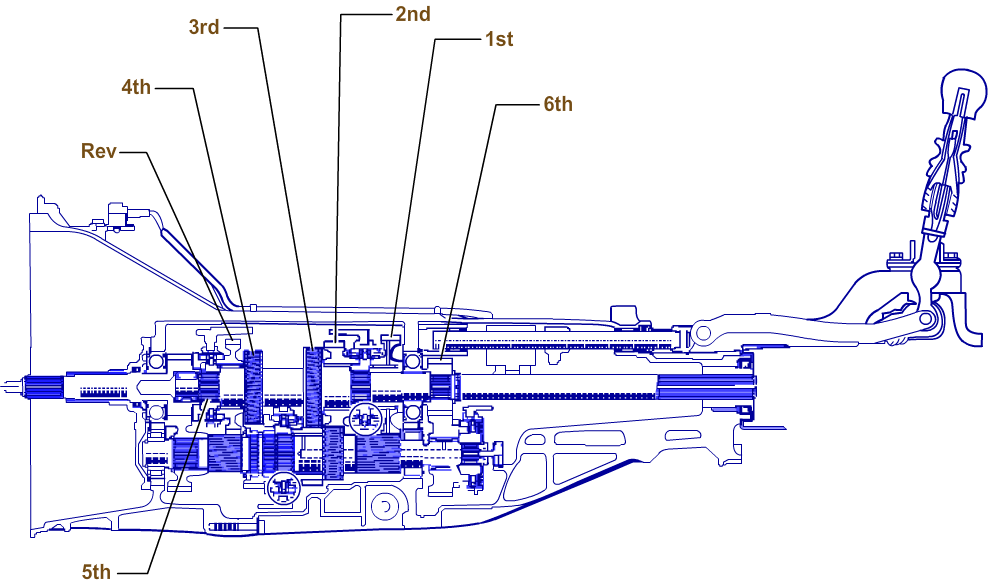 The SMT has many advantages over a standard H-pattern gearbox. First, they are more compact. Second, theyrequire the clutch only to engage from a standstill. Third, they are more reliable and faster to shift. Fourth, they can usually handle higher torque and RPM than can most standard transmissions. Finally, they are easier to build, maintain, and disassemble for repair or overhaul.

The reasons for all of these advantages are obvious once the operation of the sequential transmission is understood.

How a Sequential Manual Transmission Works

The differences from a standard H-pattern transmission start at the shifting itself. It is usually done via a small lever, paddle, or button ? one that will be far smaller in travel space than a hand lever for an H-pattern shift. This works through a gear selector ratchet or shaft. This is a small shaft (usually called a drum or barrel) that is grooved to receive pins in a pattern. These pin grooves receive the pins from the connecting portion of the selector forks. These forks are moved by the pins in the tracks each time the shaft rotates. They may stay in position, move right, or move left.

These other end of these forks connects to the output shaft of the transmission. That connection is 'always on,' meaning it is always engaged. When the fork is moved right or left (it can engage two gears, one to either side), it meshes with a corresponding gear, engaging that gear with the output shaft, transferring torque from the input shaft (turned by the engine) to the output shaft in the gear's ratio to the corresponding gear on the input shaft. As with any transmission, the gears on either shaft will conversely get larger and smaller in sequence, with the largest appearing at either end and the smaller at the opposite ends to match large with small from one shaft to the other. Unlike an H-pattern shift, however, the sequential gearbox will have all of the gears engaged with one another all of the time. There is no clutching or moving gears away from and towards one another on this transmission, they are always touching and always rotating in tandem.

The difference is that the gears on the output shaft of the SMT will be on bearings rather than fixed to the shaft. They only turn the shaft when they are engaged by their corresponding selector fork. Thus, the faster shifting possible with the SMT comes thanks to there being no need for a clutch and the impossibility of meshing more than one gear at one time. An SMT also requires the driver to pass through each gear (engage every gear) in sequence - to up- or down-shift, regardless of speed - which keeps gears from interfering with one another.

How To Use A Sequential Manual Transmission

For the driver, using a SMT is relatively simple, once it's operation is understood. Drivers will begin in neutral, from which they can shift to reverse or first gear. Once in first gear, they can shift to second, then third, and so on. Downshifting is the same, which is why you'll hear Formula One cars making pfft, pfft, vroom sounds as the driver downshifts through gears to the one he or she wishes to use.

The driver will know what gear is selected by the road speed and engine RPM, though most vehicles with SMT will include a gear readout as well ? in F1, it's often on a digital display. While the driver can more easily and quickly shift through gears, the driver must also always be aware of the gear selected and road/engine speed of the vehicle, taking care to shift appropriately. Those unfamiliar with SMT use can stall if they are in the habit of clutching to a stop (rather than downshifting).

A sequential manual transmission is robust, simple, and can greatly enhance the takeoff from standstill and overall track speed of any vehicle it is used in. Thus they remain popular in motorsport.