Get your OEM filler caps here.

What Does The EVAP System Do?

The EVAP system manages gasoline vapor evaporation from the gas tank and fuel systems. It consists of several parts but works relatively simply. 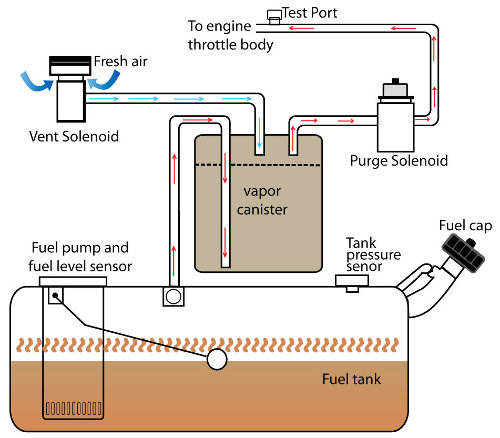 Vapors from the gasoline tank, as the vehicle sits, idles, ambient temperatures change, etc. can begin to exert pressure on the fuel tank. Before EVAP systems were invented, this pressure was usually relieved by a simple relief valve that allowed the excess gas to vent into the air underneath this car. This, of course, has obvious safety and environmental concerns (gas vapor isn't good for anyone).

Today, with an EVAP system, the excess gas fumes are purged into a charcoal canister. The fumes are collected in the canister and eventually injected into the engine through the purge control valve (PCV), where the fumes are burned.

When your Toyota's P0441 is triggered, it usually indicates a bad vacuum switch or a leak in the EVAP system that is preventing fuel vapors from reaching the canister. The P0441 code can also indicate a faulty or "stuck" PCV, a short circuit in the feed circuit, or a faulty purge solenoid.

Generally, when a P0441 code is set, other codes are also present, and these other codes often give a clearer indication of what might be wrong with the EVAP system.

However, before you dive in and start testing, it's a good idea to try a basic test: Remove the gas cap, check for dirt, grime, or other items on the O-ring inside and the fuel port it seals to, as a broken seal in this area can trigger the P0441 code. Also, check the "seat" of the cap on the filler port to be sure it is tight by simply screwing it into place until it "clicks" and then tugging to see if there is any give.

If the gas cap or gas cap seal is not the issue, it's probably time to visit your local mechanic. Testing the EVAP system includes checking the circuit and checking the purge solenoid, as well as vacuum testing the canister and PCV.

There are other trouble codes associated with the EVAP system including codes P0440 and P0442. For a comprehensive list of trouble codes, check out this article on the Toyota Parts Center Blog.