Error code P0420 - or Catalyst System Efficiency Below Threshold (Bank 1) - is one of several trouble codes that fall into the general exhaust system code block. 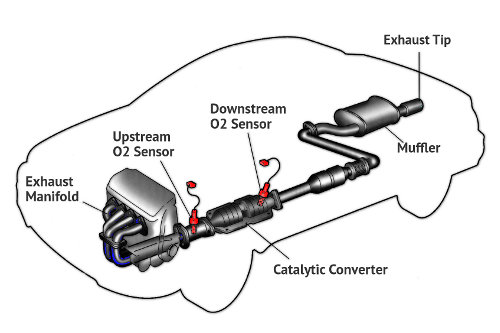 On most vehicles, there is an O2 sensor both in front (upstream) and behind (downstream) the catalytic converter. Normally, these two O2 sensors will have different readings when the car is running. The upstream sensor should have a fluctuating oxygen level, dependent on the amount of exhaust being created and the engine's fuel consumption rate.

As the exhaust gases enter the catalytic converter, they should be "scrubbed" (or converted). When these gases are read by the second (downstream) O2 sensor, oxygen readings should be relatively steady. Thus, when your vehicle is functioning properly, the reading from the first O2 sensor to the second should be quite different.

However, if the readings taken by the O2 sensors before and after the catalytic converter are the same (or very similar), the P0420 code will trip.

Most of the time, a similar reading means that the catalytic converter is not working as efficiently as it should be. However, this trouble code can also trigger when things upstream are not doing well. As a general rule, if your engine trips a P0420 code along with other upstream trouble codes, the problem you're having likely isn't related to the catalytic converter.

However, if the P0420 code is the only trouble code - or if the other codes are all P042X codes - the likelihood of a failed catalytic converter is much higher.

Several things can cause a P0420 code in a Toyota:

Because there are a lot of possible problems that could cause a PO420 code, it's a good idea to check the (far cheaper) oxygen sensors and other items before you invest in a new catalytic converter.