The engine immobilizer system, or immobilizer for short, is now common in nearly every vehicle sold. These systems have been mandatory in all vehicles sold in Germany, the United Kingdom, Canada and other nations for years and as such have also become common in the U.S. They consist of three basic parts: 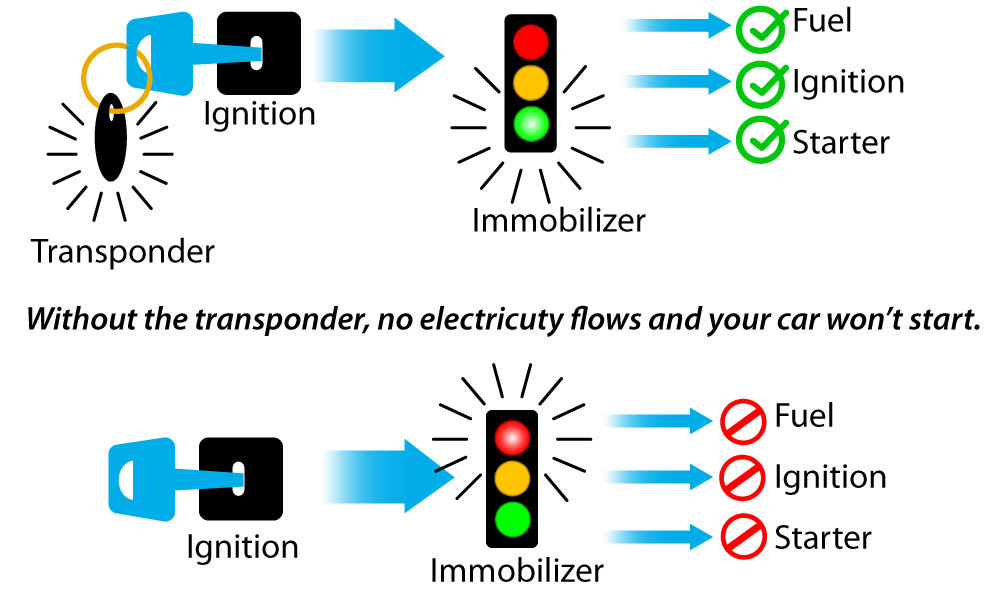 These are relatively simple electronic parts that many people call their keyfob. Keys for a vehicle usually have a plastic attachment, either as a keychain or on the key itself, which houses a radio frequency identification (RFID) circuit. The car itself, usually at the ignition switch or nearby, will have an RFID reader which sends a signal to the key and reads its response. This response is sent to the engine control unit (ECU), which checks to be sure it's the correct one. If it is, the car starts normally. If not, the car will not start, either because the ECU refuses to send fuel to the engine or interrupts the starting circuit to prevent power from reaching the starter motor. Sometimes both.

The Purpose of Immobilizers

Thanks to these immobilizer systems, the majority of vehicle thefts of newer cars are either by hauling away the car itself (towing) or by stealing the key in order to gain access to the car. New cars with immobilizers are rarely stolen by 'hotwire' methods.

Early immobilizer systems used simple, fixed RFID tags within the keyfob that were fairly easy to 'hack' by would-be car thieves. Today's systems are more complex, using cryptography and rolling codes so that the key's code cannot be easily hijacked.

Keys with RFID in them must be activated to the car, meaning they must be 'mated' to the car's ECU through a programming process. It is not uncommon for vehicles to experience problems with their immobilizer and fail to start, even when the owner of the car is in the seat and the key is the right one for the vehicle. These problems are usually either the key failing to return correct codes or, more often, the code reader or ECU are failing to interpret them. Quite often it's as simple as the keyfob being too close to other metal objects or keys from other vehicles that use a similar immobilizer code sequence. Only properly-trained, factory-authorized Toyota techs can work on an immobilizer system for a reset and repair.