The Toyota RAV4 is a beloved import SUV, introduced in America in the late 1990s. It was one of the first small crossover SUVs on the market — which is hard to imagine now with so many models flooding the segment today. It’s a model known for its blend of good fuel economy and favorable road manners. Take care of yours, and service it with OEM parts, and it will outlast practically anything on the road. Here’s how the RAV4 has grown over the years.

Get Your Toyota RAV4 Parts Here × 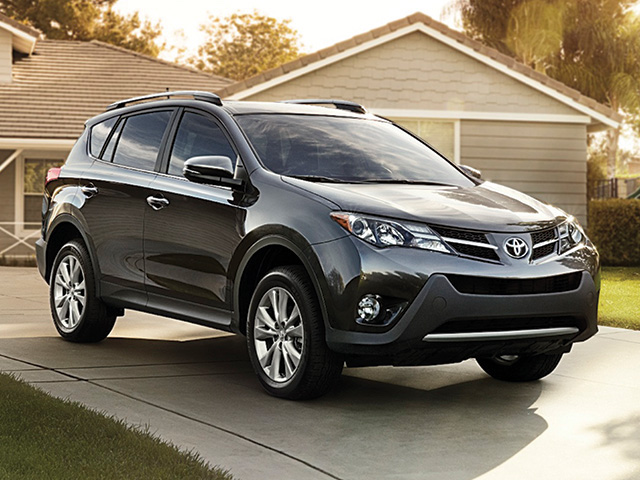 Toyota Dreamed of Something Different

When the RAV4 was launched, it created a segment of its own: the compact sports utility. This new class bridged the gap between the traditional off-roaders, and regular passenger vehicles.

The construction was unique, while keeping a favorable height and good ground clearance. It used the chunky looks of a traditional 4×4, but enlisted a car-like unibody design. The result was a car-based SUV that was comfortable, affordable, and roomy.

Toyota’s development team had been toying with the idea of the model as far back as 1986 — it was then when the concept was initially discussed. The first actual RAV4 made its way in to the spotlight during the Tokyo Motor Show in 1989. This concept was repackaged for the 1993 show circuits, and it was much closer to the production version.

In making the RAV4, Toyota would use components from its trusted catalog. The platform was borrowed from the Corolla, engine and some driveline from the Camry, and suspension from the Celica GT-four. The result was a unique recipe that other automakers would later go on to copy for making car-like SUVs. 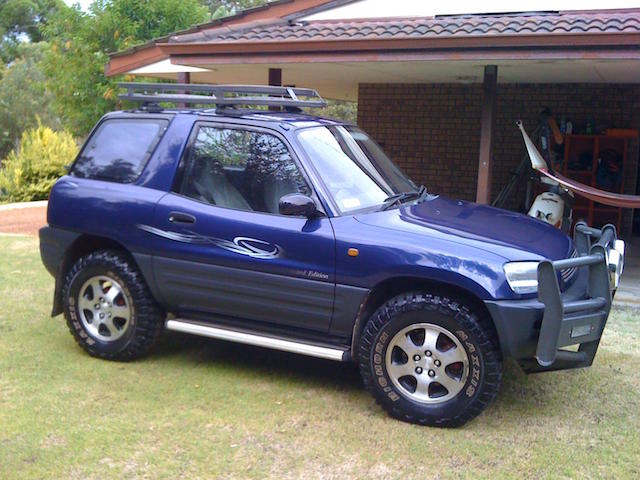 The first generation of the RAV4 was launched in May of 1994 in the United States as a 2-door, 4-seater with a 2.0L 4-cylinder 16-valve engine. The 3S-FE engine was a near hot-hatch level performance engine. It offered a permanent four-wheel drive platform, with a five-speed manual or four-speed automatic. An optional locking center differential was available for serious off-roaders. The RAV4 was a hit amongst drivers and critics alike.

The compact size, car-like handling, impressive off-road capabilities, and surprising equipment levels made most auto buyers happy. However, some felt it could stand for more passenger space and luggage room. To correct this, Toyota launched a four-door version in 1995, and turned it into a full five-seater. 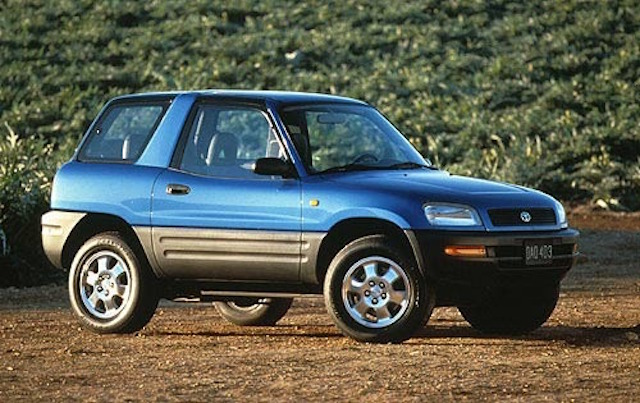 It wasn’t until 1996 that Toyota would would launch the four door RAV4 in the USA, which came with a few subtle changes. The 1996 models also had an optional entry level front wheel drive only version. 1997 would be the year of the all-electric RAV4 EV model made to comply with the California mandate for zero emission vehicles. The well-advanced model had a 120 mile driving range. 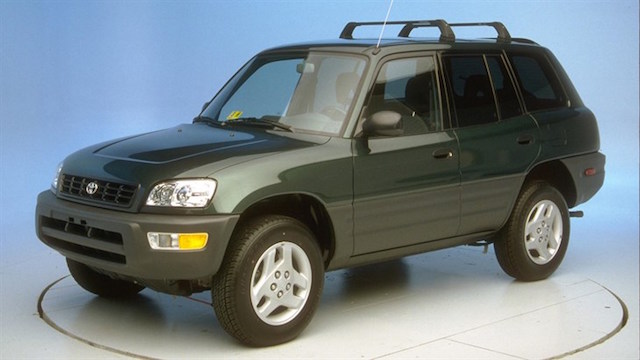 A facelift in 1998 would come along with more equipment, improved safety features, more power, and little more refinement. New headlights and lenses gave the RAV4 a sharper look, and Toyota introduced the Cabrio model. 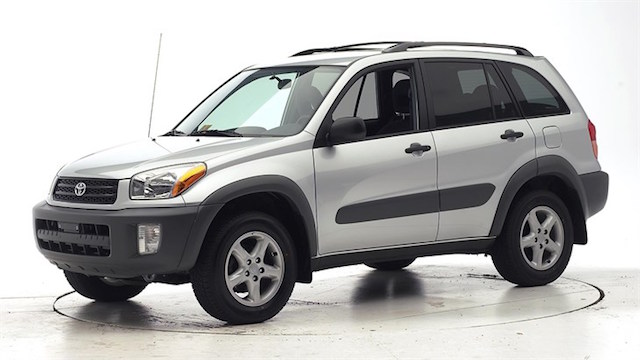 When the new generation rolled in during the 2001 year model, the RAV4 had more competition. It was now a longer, wider, and roomier vehicle than before — although it wasn’t any heavier than before. In addition, it shared fewer components with other Toyotas, and was now 70% unique to itself.

Two and four door models were produced again. Both had unique side opening tailgates, and the transmissions were once again five-speed manuals, or four-speed autos. The four-wheel drive setup now came with a center differential, a unit derived from the Lexus RX300.

The S-series power train was replaced with the new AZ-series 2.0L alloy engine with variable valve times and 148 horsepower. The only notable change for 2004 was an upgraded power train in some markets.

The Third Generation Rolls In 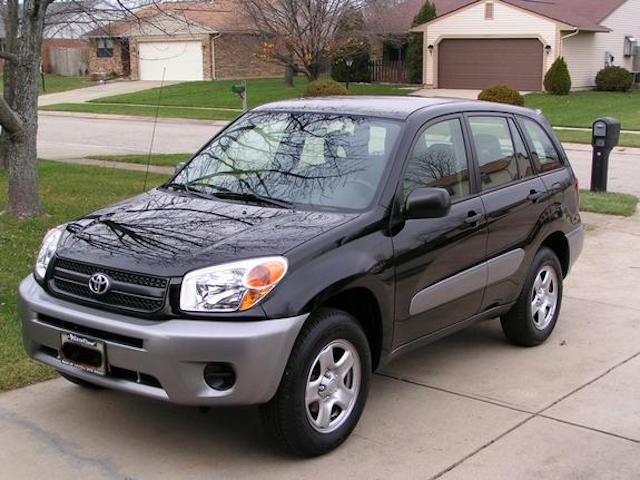 In 2005, the RAV4 exhibited maturity. The size and standard equipment level increased once again, as well as the increase of equipment. A new unibody design was 76% stiffer than the outgoing model, offering improved safety and durability. NVH (noise, vibration, and harshness) in the RAV4 was also improved, and the new model rode on a double wishbone independent rear suspension with diagonally-set dampers. Ground clearance was increased and steering was now electrically assisted.

For the 2009 year model, the RAV4 was given a mid-cycle makeover with a number of changes like a new 4-cylinder transmission and new front end. The Limited model got a different grille and bumper cover from the rest of the lineup. 2011 saw a new facelift as well, with no substantive changes beyond appearance.

The new 4th-generation of the RAV4 was revealed at the Los Angeles Auto Show in 2012. Sales began in the United States in early 2013. With a single 4-cylinder engine option and a 6-speed automatic, the new model was simpler than the outgoing 3rd gen RAV4. While the V6 was lost, the 2.5L 4-cylinder offered a great mix of power and fuel efficiency, producing 176 horsepower while reaching nearly 30mpg on the highway (29mpg for AWD models, 31mpg for FWD models). The 4-cylinder was also quick, with a nearly 7-second 0-60 time.

One of the biggest changes with the 4th generation RAV4 was moving the spare tire from the rear door to the undercarriage. This change cleaned up the appearance of the RAV4, but also made it possible to change the rear liftgate from a side opening gate to a vertically opening gate, a well received change. On the inside, the newest RAV4 featured an upgraded interior with a richer, more luxurious appearance.

Finally, the 4th generation RAV4 is notable for it’s substantial cargo space, with or without the rear seats folded. Folding down the rear seats is straightforward – just one lever to pull – opening up a 73 cubic foot cavern. Quite a change. 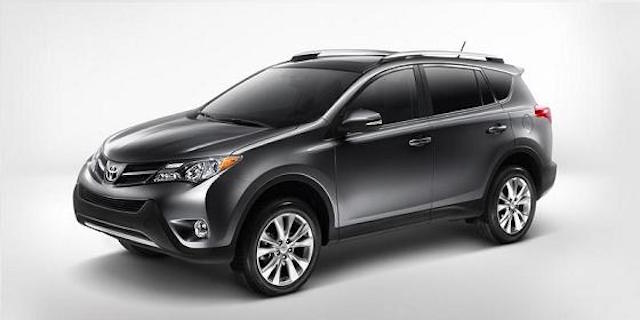 Toyota has previewed the refreshed 2016 RAV4, with the official debut at the 2015 NY Auto Show. The refreshed model features:

The biggest shock with the 2016 RAV4 Hybrid? It will offer more performance than the standard gas powertrain! Toyota has tuned the hybrid to offer nearly 200 horsepower (194) and an additional 30 lb-ft of torque, making the hybrid a full second faster than the standard model from 0-60. Of course, the hybrid delivers great fuel economy too, with an estimated 34mpg in the city and 31mpg on the highway.

Summing up, the RAV4 has changed a lot over the years. From an affordable little 2 door SUV in 1994 to a comfortable and fuel efficient family vehicle in 2016, the RAV4 defined a new automotive segment. Toyota hit a homerun with the RAV4 too, as sales have only increased over time. The RAV4 is one of Toyota’s stand-out vehicles. It will be interesting to watch it evolve further.