While later generations of the Toyota Supra became serious GT cars with supercar performance, the original was something quite different. In fact, it wasn’t even called a Supra, at least in its home market — export models wore “Celica Supra” badges, but in the Japanese domestic market, the car was called Celica XX (pronounced “double X”). 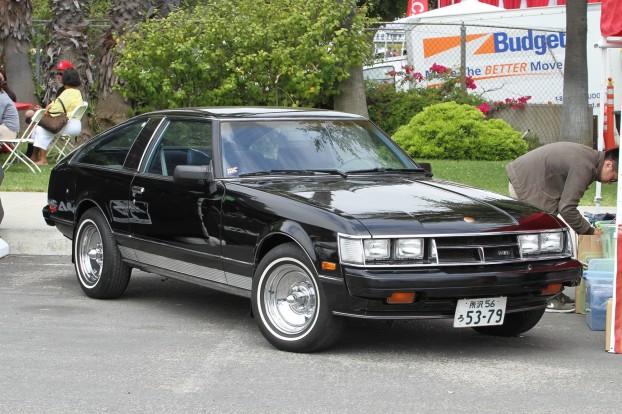 This 1980 Mark I Supra was photographed at ToyotaFest 2013. The wheels are not stock. We believe the car belongs to Ben Hsu of JapaneseNostalgicCar.com (click photo to see more images of this car, or one that looks awfully similar…).

As its name implies, the Celica XX/Supra had a strong kinship with the second-generation Toyota Celica. The original Celica, launched in 1970, had been a Japanese answer to the Ford Capri or the original Ford Mustang: a compact, affordable sporty coupe with mechanicals borrowed from the company’s other models, enlivened by a lengthy option list and performance that ranged from subdued to sprightly depending on engine. The second-generation Celica, launched in August 1977, was more of the same, albeit a little softer, a bit bigger and sporting restyled sheet metal, the first production design from Toyota’s Southern California CALTY Design Research center. 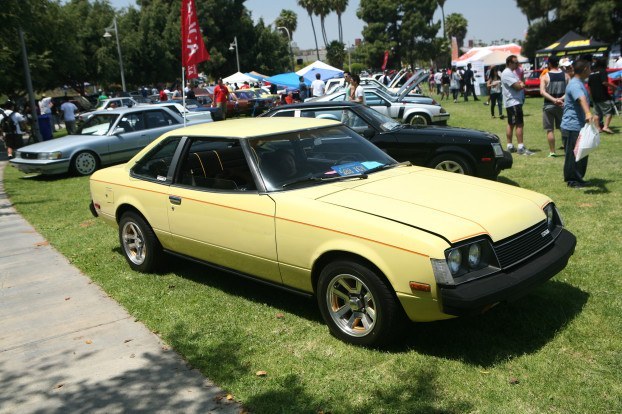 This second-generation Celica and Mark I Supra are strikingly similar, once you get under the sheet metal. Photo taken at ToyotaFest 2013. Click here to see more photos from ToyotaFest.

The first-generation Celica had offered engines with up to 145 hp JIS (most of which weren’t sold in the U.S.), but all had four cylinders. The obvious next step was to add a six, something rivals like the Capri had offered for years. Toyota in those days did not have a V-6 that could be shoehorned into the space intended for an inline-four. Consequently, the Celica’s body had to be stretched ahead of the firewall to make room for the corporate M-series engines used in the Toyota Mark II, Chaser, and Crown. 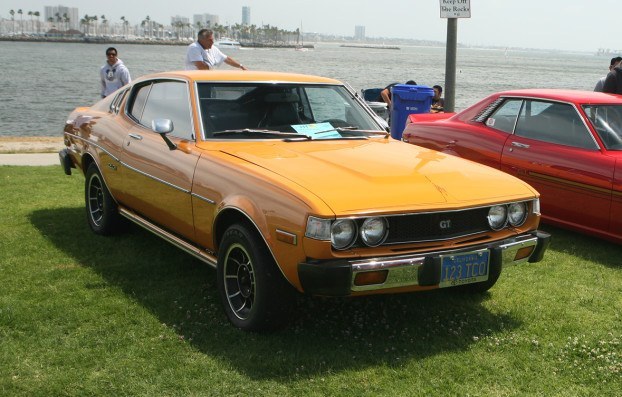 Here’s a photo of a 1977 Toyota Celica GT for reference. This photo was also taken at this year’s Toyotafest.

The result, introduced in April 1978, was the Celica XX, which used a modified version of the Celica Liftback body with the wheelbase increased from 98.4 to 103.5 inches (2,500 to 2,630 mm) and a new nose that brought overall length to 181.1 inches (4,600 mm). The XX got 14-inch wheels, four-wheel disc brakes, nicer trim, and additional standard equipment, but was mechanically similar to the four-cylinder car, sharing the same suspension layout (MacPherson struts in front, a live axle on coil springs in back, located by trailing arms) and even the same 16.1-gallon (61-liter) fuel tank. 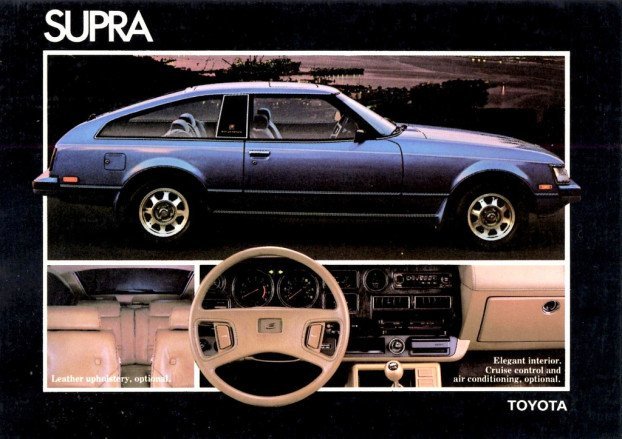 The U.S.-market Celica Supra, introduced in 1979, offered only the 2,563 cc engine, initially rated at 110 SAE net hp. (It’s worth noting that JIS ratings of this period were gross figures — measured without engine accessories — so the difference in power between the Japanese and American engines was not nearly as great as it appears.) For the 1981 model year, this was replaced by the 2,759 cc (168 cu. in.) 5M-E engine from the latest Crown and Cressida sedans, bringing output to a whopping 116 hp SAE.

If you wanted a really sporty Celica, the XX was not your best choice. For roughly the same money as a 2000 XX, Japanese buyers could order the lighter Celica 2000 GT with a fuel-injected 1,968 cc (120 cu. in.) DOHC four (built by Yamaha, in which Toyota owned a stake) boasting 135 hp JIS. Of course, U.S. customers didn’t have that option; all federalized four-cylinder Celicas used a mildly tuned, carbureted 2,189 cc (134 cu. in.) four with 95 hp SAE (90 hp in California). However, the Supra’s extra weight meant that the six-cylinder car wasn’t dramatically quicker than the four-cylinder Celica.

Where the sixes had the edge was in smoothness, refinement, and low-end torque, which allowed more relaxed cruising, particularly with automatic. Toyota advertised the XX as “plush, lush” and the suspension was tuned accordingly, with soft springs and damping that favored comfort over body control. The 2000 XX had slower steering than four-cylinder Celicas, probably due to the extra front-end weight; the optional power steering (standard on the 2600 XX) was quicker but rather lifeless. It wasn’t a car for boy racers, although a stiffer suspension and an optional sport package were added for the 1981 model year. 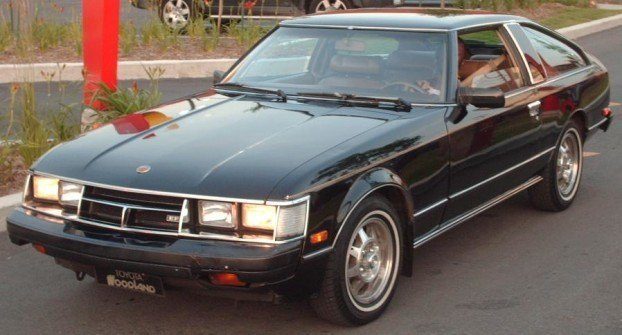 A 1981 Toyota Supra, via Wikimedia

American car magazines like Car and Driver and Road & Track dismissed the Celica Supra as a flabby crypto-luxury car in the mold of Chevrolet’s Monte Carlo, but in Japan, the Celica XX occupied an interesting niche. Its most direct rivals were the Mazda Cosmo and the Nissan Skyline GT hardtop, but the Cosmo was smaller than the XX and needed one of the optional rotary engines to match the Toyota’s performance, while the Skyline didn’t offer an engine larger than 1,998 cc (122 cu. in.) and was a two-door version of a sedan, not a sporty coupe. The Fairlady Z, which would later become the Supra’s archrival, was substantially more expensive in 2.8-liter form, while Mazda’s Savanna RX-7 was smaller and harder-edged.

Sales of the first Celica XX/Supra never approached those of the cheaper, thriftier four-cylinder Celica, but the six-cylinder car’s commonality with its popular cousin probably made the XX relatively cheap to engineer and build. As a result, its sales were good enough to earn a reprise when the Celica line was redesigned in 1981.

This time, Toyota hedged its bets by replacing the Celica XX with not one but two new models. The first was the Soarer, which shared the elongated Celica platform but had unique styling and more features. The second, which bowed five months later, was the second-generation Celica XX/Supra, which shared the Soarer’s engine and running gear but had a firmer suspension and much more aggressive styling. 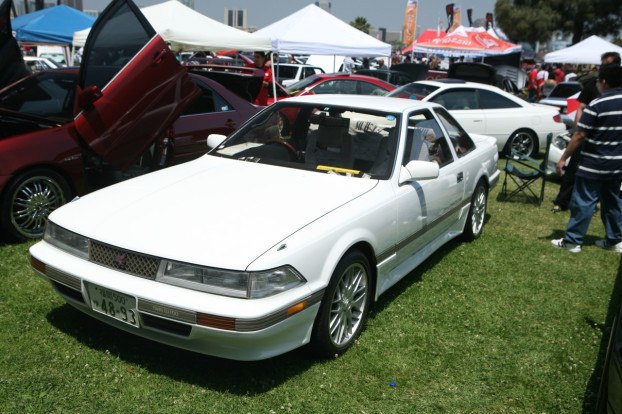 A Toyota Soarer, as seen at Toyotafest 2013.

From then on, the Soarer would continue the original XX’s mission as an upscale luxury cruiser, freeing the XX/Supra to become a full-fledged sporty GT and setting the stage for the racier Supras still to come. 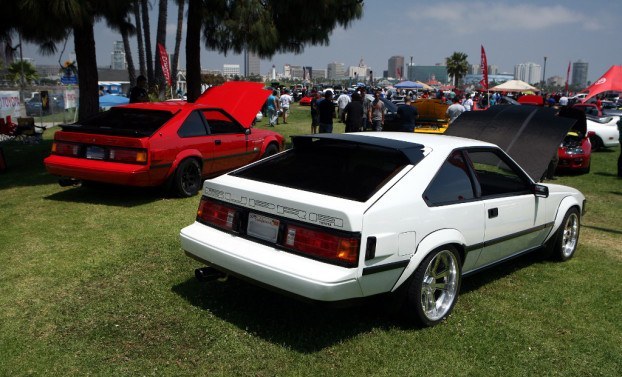 After the first generation, the Supra became more of a sports car and less of a “cruiser.” Photo from ToyotaFest 2013.