The fourth-gen Supra, introduced in 1993, was not only the fastest Supra ever, but also one of the most formidable performance cars Toyota has ever offered. Unfortunately, it was also the least commercially successful Supra, and would be the last. 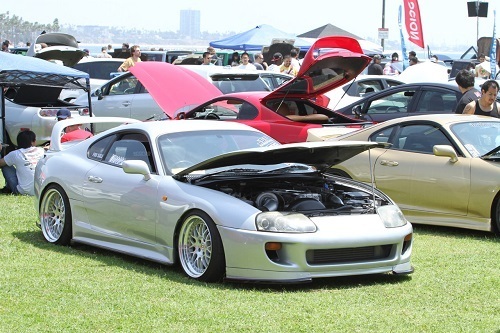 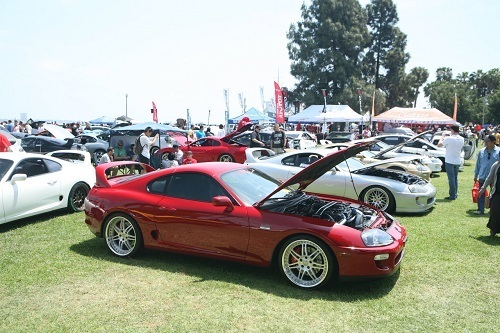 Toyota was by no means oblivious to criticisms of the three previous generations of its six-cylinder Supra. During the development of the fourth-generation car, Toyota product planners actually invited various automotive journalists to drive rival cars and offer feedback and suggestions on everything from aesthetics to steering feel. The new Supra that debuted in May 1993 represented a concerted effort to give those critics everything they wanted.

The fourth-gen Supra again shared its platform with the upscale Toyota Soarer coupe, sold in the U.S. as the Lexus SC. However, the two cars looked nothing alike and the Supra was more than 13 inches (340 mm) shorter than its luxurious cousin. There was still only one body style, although a lift-off Sport Roof (called Aerotop in Japan) remained optional.

One of the major complaints about the previous Supra was that it was simply too big. The new car was about 4 inches (100 mm) shorter than before on a 1.8-inch (45mm) shorter wheelbase — although overall width was up 4.7 inches (120 mm) — and a careful diet trimmed at least 125 pounds (60 kg). The new Supra remained one of the bigger cars in its class, roughly the size of a Corvette, but it was now a bit lighter than the smaller Nissan 300ZX, though not the bantamweight Mazda RX-7.

The fourth-gen Supra again had double wishbone/multilink suspension, a new setup loosely related to the Toyota Celsior/Lexus LS400 sedan’s. While the contemporary Soarer was offered with active suspension, air springs and four-wheel steering, the Supra settled for a well-tuned conventional suspension, even discarding the previous car’s adjustable shock absorbers. The only really gimmicky feature was the motorized front spoiler offered in some markets.

Naturally, the Supra retained four-wheel disc brakes and most models had ABS; turbos also had a Torsen limited-slip differential and electronic traction control. Normally aspirated cars had either a five-speed manual or four-speed automatic transmission, while turbocharged models were available with a choice of four-speed automatic with manual shift mode or a new six-speed gearbox. (In Japan, the six-speed later became optional on normally aspirated cars, but that combination wasn’t offered for export.)

Thanks to changes in Japanese tax law, there were no longer any dramatic differences in specification between domestic and export Supras. The earlier 1,988cc (121 cu. in.) sixes were gone and all Supras now used the new 2,997cc (183 cu. in.) 2JZ engine, making 220 hp SAE in normally aspirated 2JZ-GE form. The turbocharged 2JZ-GTE now had intercooled sequential twin turbochargers, providing more power and less lag than the earlier single-turbo engines. In Japan, the “Twincam24 Two Way Twin Turbo” was underrated at 280 hp JIS in keeping with Japanese automakers’ voluntary agreement to limit advertised horsepower. The mechanically similar U.S. Supra Turbo claimed 320 hp SAE, while European cars had 326 hp DIN. 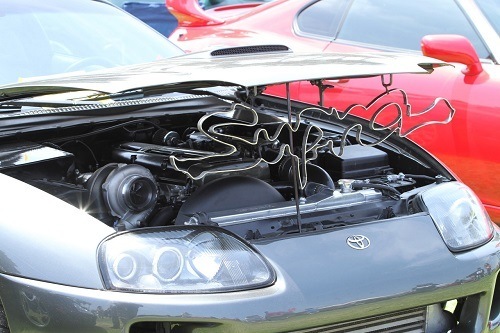 With more power and less weight, the fourth-gen Supra was a very fast car. Normally aspirated cars could almost match the previous Supra Turbo, while twin-turbo Supras were capable of 0-60 mph (0-97 km/h) in about 5 seconds and an electronically limited top speed of 155 mph (250 km/h), making them somewhat quicker than any Japanese rival and quite a few contemporary U.S. and European cars. The Supra’s brakes and cornering grip were similarly spectacular and the traction control system provided a useful safety net without compromising the overall handling balance.

Objectively, the Supra excelled; subjectively, it was easier to respect than covet. The Supra’s styling won it few friends; it was less cohesive than the Nissan or the Mazda, an agglomeration of pieces in search of a theme. Furthermore, some of the fourth-gen Supra’s eye-popping handling had been achieved at the expense of the third-gen car’s civility. The stiff ride and excessive road noise grew wearisome on long drives and cargo space was meager even with the child-size rear seats folded down. For all that, the Supra’s steering still lacked the sensitivity of the pricier European supercars whose performance it otherwise rivaled.

Still, in terms of sheer capability, the Supra left little to be desired and tuners found that it was possible to extract substantially more power. The fourth-gen Supra also found success on the racetrack, particularly in the Japanese Super GT series.

Unfortunately, that success wasn’t matched on the sales floor. Toyota anticipated annual sales of up to 24,000 cars, but the fourth-gen Supra never reached even two-thirds of that figure. The Supra’s rivals were doing no better; sales of the 300ZX and other high-end Japanese sports cars were drying up. 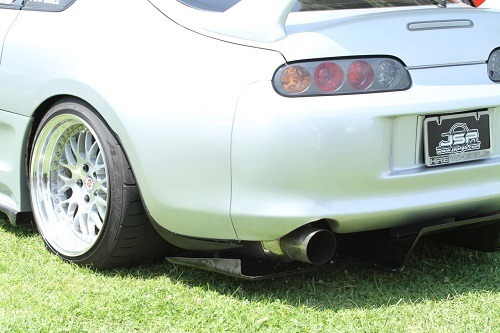 One reason was that buyers were increasingly tempted by trucks and sport utility vehicles. Another problem was price, exacerbated for export cars by unfavorable exchange rates. The Supra sold well in the U.S. when it listed for less than $30,000, but by 1995, a well-equipped Turbo was edging closer to $50,000, a price at which many buyers were as concerned with making an impression in the valet line as with outright performance. Meanwhile, the Supra’s price put it out of reach of younger customers attracted by its specifications.

Poor sales led to the demise of the European Supra in 1997 and U.S. cars disappeared after 1998. Home-market sales continued through 2002, but production totaled only around 45,000 units, fewer than the second-generation car had sold in a year.

Toyota could have developed a fifth-generation Supra based on the Z40 Soarer/SC430 that debuted in 2001, perhaps trading the six for the 4,292cc (262 cu. in.) 3UZ-FE V-8, but the demand didn’t seem to justify the cost. There have been occasional rumors since then of a new Supra, but whether the nameplate will return — and in what form — remains to be seen.