The Toyota Tesla RAV4 EV, presented at this year's LA auto show, runs on Lithium metal oxide batteries and has a reported range of 100 miles.

Officially presented on the 17th of this month by Toyota Motor Sales U.S.A. president Jim Lentz, this brainchild of Toyota and Tesla Motors is part of a  “demonstration and evaluation program through 2011, aiming at market arrival of a fully-engineered vehicle in 2012” [quoted from the press release]. To the casual observer, the RAV4 EV obviously follows a completely different style from its predecessors, but the real magic is what’s under the hood.

They naturally started with the battery. Inside the RAV4 EV is an array using a “lithium metal oxide battery with usable output rated in the mid-30 kwh range.” While this tech does up the overall weight of the vehicle by nearly 220 lbs, Toyota has compensated by reworking the power-train, suspension system, and steering mechanisms, and “major components needed to be relocated to better balance the increased mass of the battery pack.” According to the announcement, the demonstration vehicle they presented can accelerate from 0-60 nearly as fast as the current RAV4 in production. 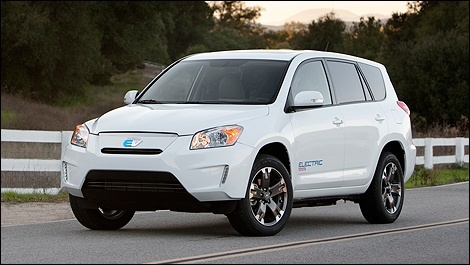 The RAV4 is one of 35 vehicles that will be tested and demonstrated by Toyota to prepare for a 2012 EV launch.

The body of the RAV4 underwent significant changes as well. With the “front bumper, grille, fog lamps and head lamps” all redesigned. in the press release, Toyota said that the “new EV badging and the custom “mutually exclusive” paint color, completed the transformation.  The interior received custom seat trim, multimedia dash displays, push-button shifter and dashboard meters.  The RAV4 platform brings a 73-cubic-foot cargo area with rear seats folded down – no cargo space was lost in the conversion to an electric powertrain.”

When Toyota set out to build this masterpiece, they started with what they already had. Why fix something that already works, right? With Tesla providing the batteries the company is so widely known for and Toyota providing its already existing Toyota Parts to the RAV4 EV build, the two companies were able to work up a plan of action to get vehicles like this, with a claimed range of 100 miles on real road patterns, onto showroom floors by 2012. According to the presentation, there will be a total of 35 different models, makes, and versions of Tesla-Toyota vehicles presented at various auto shows around the world to gauge the public opinion, preferences, and drivability of the products when it comes to EV’s.  While the company did not mention if those 35 test vehicles would all end up in production, which is unlikely, they did guarantee one EV by 2012.