The competition in the mid-size car market just got tighter with a new Toyota Camry and Hyundai Sonata unveiled just an hour apart at the 2014 New York International Auto Show. Here is our first glance at both models. 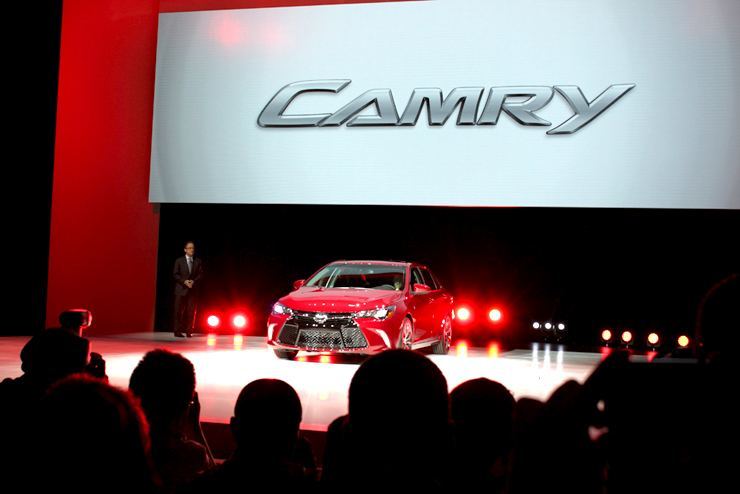 The undisputed sales king took the stage first with the XSE sports package.

For years, the Toyota Camry has been the undisputed segment leader. It has helped solidify Toyota’s reputation of quality, reliability and dependability. Plus, its global sales have helped Toyota become one of the largest automakers in the world. Things were going great for the Camry, until the Sonata came along. 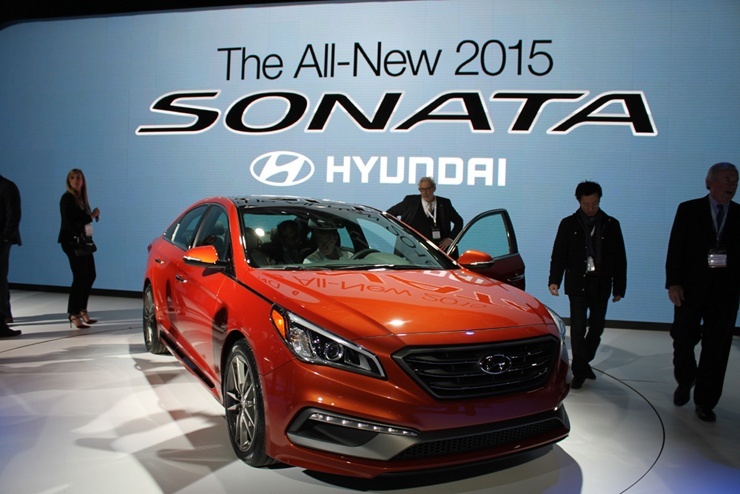 The 2015 Sonata took the stage about an hour later.

In 2011, Hyundai launched a new, stylish Sonata which was radical departure from the conservative styling found throughout the segment. Customers responded to the mid-size sedan and sales zoomed. Besides the styling, the Sonata was filled with features and priced it below major competitors like the Toyota Camry.

Now at the 2014 New York International Auto Show, Toyota and Hyundai are going head to head with both displaying new vehicles. Here is a quick overview. 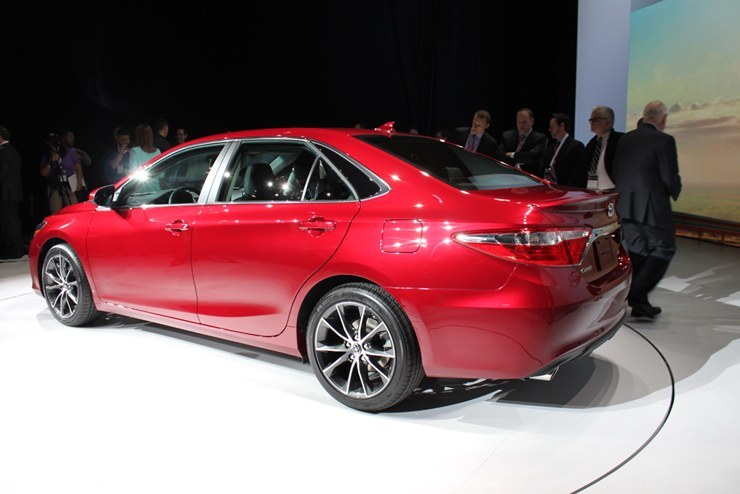 Boring is out and stylish is in for the Toyota Camry.

Typically a mid-cycle refresh, like the Camry was supposed to be, is usually just some interior styling and trim package changes. This isn’t the case with the 2015 Camry. Toyota moved up its normal product cycle timing and introduced 2,000 new parts. It also will get a brand new sport trim package, the XSE. This new package is distinguished with its Lexus-like grille and front fascia. Officially, this hour glass shaped grille with mesh is more symbolic of Toyota’s sport models according to Mike Michels, Toyota Vice President Product Communications.

Toyota aimed at making the new Camry sportier since 45 percent of its customers opted for the SE or sport trim on previous models. This new trim offering appeals to this group.

Hyundai decided to keep with its luxury focus in a mid-size sedan. Their new sedan follows the “Fluidic Sculpture” design it used five years ago yet with a more refined look. Its design looks so much like a luxury model that some journalists have compared it to an Audi. 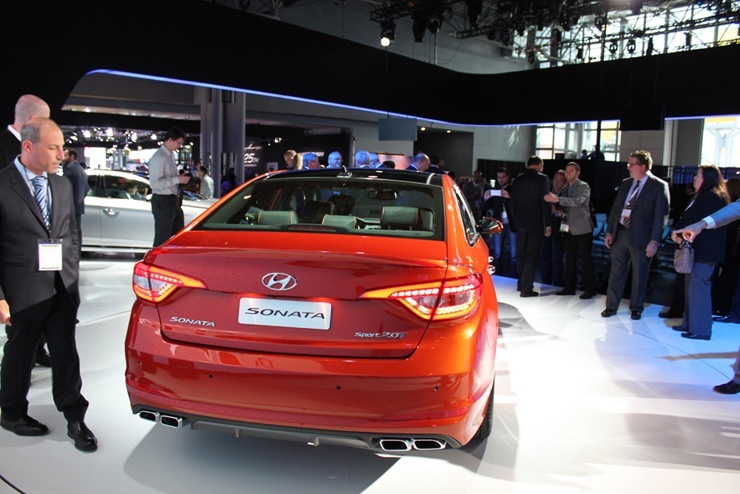 Hyundai has done a great job with the styling on this Sport 2.0T model. Is it enough to unseat the king? Nope.

They aren’t dropping the sport focus altogether though. Hyundai plans to offer a Sonata Sport package with a more aggressive front grille and bumper, side rocker extensions and side chrome molding. Sport 2.0T models feature a unique rear bumper fascia, quad exhaust tips and 18-inch alloy wheels. Like Toyota, Hyundai thinks the sport models will be their top selling trim.

For the interior, Toyota focused on improving the driver’s experience and upgrading the materials. The driver of the 2015 Camry has a new cockpit offering “intuitive top-flight in-car electronics and displays.” They also added a new 4.2 inch TFT screen between the three-dimensional “Optitron” gauges for the SE, XLE and XSE models. This new screen means the driver won’t have to look away from the road as they look over a range of vehicle functions and multimedia information. 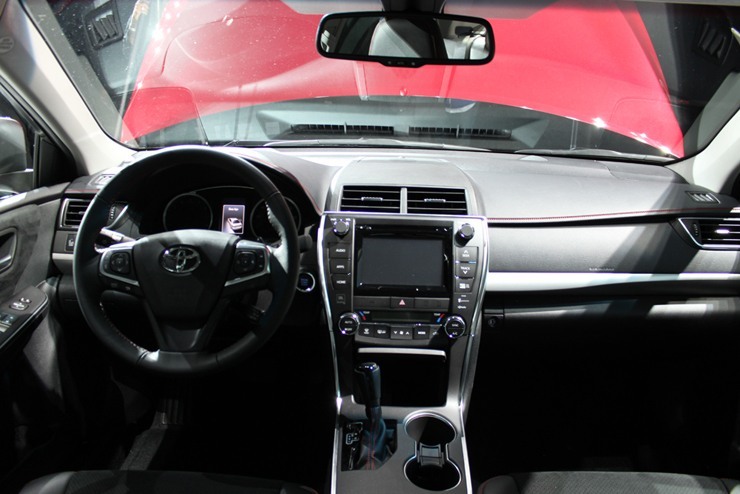 The interior of the 2015 Camry is sporty yet luxurious feeling. You can see the new 4.2 inch TFT screen illuminated on the dash.

Throughout the interior, Toyota added more premium materials and styling to add more luxury to the vehicle. The seats feel soft to the touch and the controls/knobs have all been improved. This Camry won’t get knocked for a large amount of plastic or a harsh interior. It has a very premium feel to us. 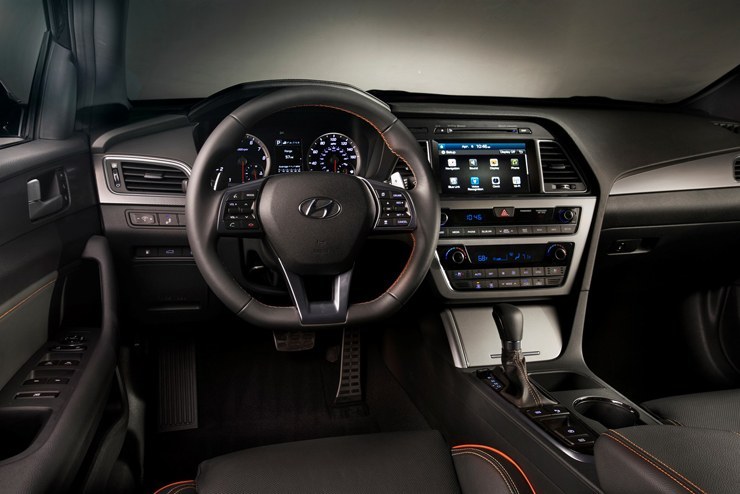 The interior of the new Hyundai Sonata is really refined.

Hyundai also added more luxury to its interior and improved their materials. However, they paid a lot of attention to upgrading their sport models. The Sonata Sport 2.0T has a D-cut steering wheel, paddle shifter and a sport instrument cluster with a six o’clock needle position. This interior is meant to enhance the driving experience of the sport model. 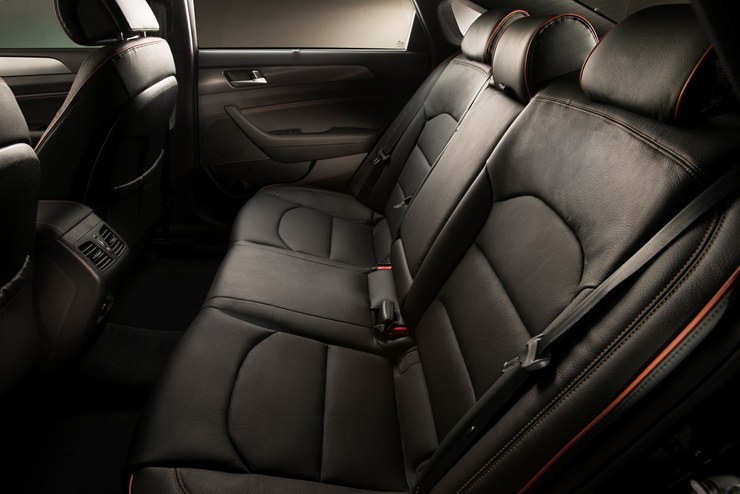 The Hyundai Sonata has an upgraded interior, but the Camry does have better materials.

While we didn’t get a chance to drive either model at the show, on paper they have both improved. Toyota says the 2015 Camry is the best driving model they have ever built. This is due to a stiffer chassis, new hydraulic system for the brakes that will give them more of a sports-sedan feel and a wider track (distance between the wheels) that will improve handling.

They have changed how they build it and have added “additional spot welds were added to the door opening flanges to increase rigidity and enable spirited handling.” Also, they have worked to improve the steering wheel response and on-center feel of the vehicle.

Toyota has also said they have worked to make the 2015 Camry the quietest mid-size sedan on the market. With a more responsive driving performance and extremely quiet cabin, the new Camry should be a great improvement.

Powertrain options for the Toyota are all carryovers from the previous models.

While, Hyundai will continue to use similar powertrain options it has offered in the past, they have revised the 2.4L four-cylinder used in SE, Limited and Sport models. It now produces 185 HP and 178 lb. ft. of torque (190 HP and 179 lb. ft. of torque – 2014 Model via Hyundai’s website).

The 2.0L turbo-charged engine has also been revised and it is now optimized for lower-RPM drivability. It will now produce 245 HP and 260 lb. ft. of torque (274 HP and 269 lb. ft. of torque – 2014 Model via Hyundai’s website). Hyundai says this will provide better responsiveness and more torque in the low and mid RPM range.

Both cars come with a now standard assortment of safety features including multiple airbags and other restraint systems.

Also, they both offer:

What separates the two cars? Here are some unique items that help differentiate them: 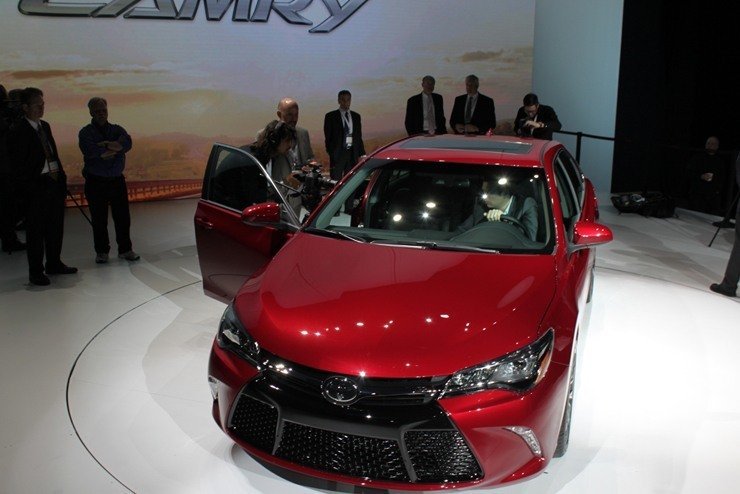 Both cars have definitely improved and customers should be excited by the changes. While Hyundai is adding many great features, it is still the underdog. Toyota has its reputation for quality, reliability and dependability on its side, plus it has a fancy new sport model. For our money, we’ll buy the Camry. Yet, competition is good for everyone.