Traditionally, Americans distrust diesel. Most of the U.S. market left diesel passenger cars back in the 80‘s with VHS copies of E.T. and best-forgotten sweater vests.

But GM isn’t giving up on diesel. The American automaker paired with American engine designers, diesel specialists in Italy, and German vehicle engineers to craft a Prius-fighting stealth warrior.

The 2014 Chevrolet Cruze Diesel aims to overpower America’s soot-coated perception of diesel engines and leave hybrids in the dust. 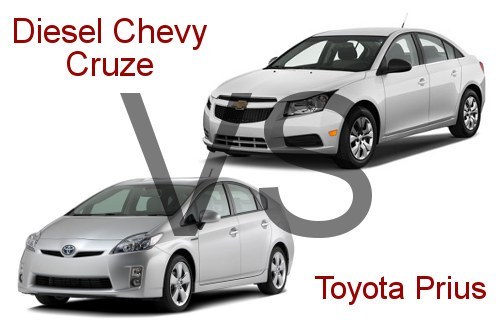 Comparing the Diesel Chevy Cruze and the Toyota Prius

Diesel in the U.S.
Diesel is growing. Diesel vehicle sales have grown more than 27 percent in the last year, and the automotive industry is ushering in more new models in the coming year. What’s more, nearly half of all U.S. service stations now offer diesel, an indication that diesel vehicles are becoming more common.

Why the rise in popularity? As gas prices ominously circle $4 per gallon, drivers are looking for new ways to save at the pump. While diesel fuel is typically $0.25-$0.40 more per gallon, new diesel engine designs are 30-40% more efficient than gasoline engines…which makes diesel more cost-effective despite the higher price.

2014 Chevy Cruze Diesel Specs
Chevrolet teases diesels lovers with tidbits of information, but hasn’t released the full specifications and ratings. But what we do know is very interesting.

The Chevy Cruze diesel has darted through the streets of Europe and Australia for several years now. The European Cruze diesel is rated for 161 hp and 266 lb-ft of torque, but federalized output ratings are not yet available for the U.S. Some changes will be in order to comply with EPA regulations, but these horsepower and torque numbers are substantially higher than the Prius…which means the Cruze diesel should win any performance comparison.

For the U.S. market, the turbo-diesel Cruze engine will be equipped with the AdBlue urea emission control system. The system injects a small amount of vaporized liquid urea and water solution into an exhaust after-treatment catalyst. The process neutralizes nitrous oxide into nitrogen and water. The urea tank will be refilled during every oil change.

GM says the diesel Cruze will be virtually indistinguishable from the gas-powered model.

Diesel vs. Prius
Hybrids have hype on their side. Consumers have been lured by the ploy that hybrid vehicles are goodfor the environment when the reality is — they’re just not as bad. According to the UK’s Low Carbon Vehicle Partnership, hybrid vehicles produce a carbon footprint 16% larger than conventional combustion engines.

Mile for mile, the Chevy Cruze will be able to hold it’s own against the Prius if GM’s engineers can hit their 50 mpg goal. Even if they fall short, the noted longevity of diesel vehicles works to an owner’s advantage.

Since the carbon footprint of a making a vehicle is often equal to the one made by a lifetime of driving, it’s fair to call the scales more evenly balanced. Hybrid vehicles take out a larger “carbon loan” at the beginning and promise to pay their carbon debt back over the years. Diesel vehicles don’t take out a loan – they just burn more carbon year after year.

So, when it comes right down to it, the Prius vs Cruze battle shapes up like this:

Bottom Line: Will Prius owners be lining up to buy the new diesel Cruze? Probably not. But new potential Prius buyers will have more to think about.

Author Jason Lancaster is a long-time auto industry observer who works with GMPartsOnline.net, a website offering GM parts at discount prices – even parts for the Chevy Cruze.