Chevy’s newest Corvette enjoys ‘best bang for the buck’ status in the world of performance automobiles, and for good reason: The Vette offers supercar performance at a price that none of the supercar brands can compete with. It’s every bit as capable as cars that cost two to three times as much.

But when the production Supra hits the streets sometime in the next 18 months, the Corvette just might get knocked off the top of the “affordable performance mountain,” at least if Toyota builds a Supra anything like the last model they offered in 1998.

Here’s what we know about the FT-1 coupe that Toyota will undoubtedly offer as the Supra, and why GM should be concerned.

Rumors About The New Supra’s Specs and Features

Corvette enthusiasts appreciate automotive lineage, perhaps more than any other type of enthusiast. Owning a Corvette is owning a piece of American automotive history, sharing in decades of racing success and iconic pop culture status. In the case of the new Supra, the lineage is pretty good: The new Supra will be the result of a joint effort by Toyota and BMW, arguably the world’s best manufacturers in terms of quality and innovation. They will be collaborating on a new platform to underpin the car, with each manufacturer adding their own style and design to the final product.

BMW and Toyota are also said to be collaborating on a hybrid powertrain for the vehicle that will incorporate the lessons learned from each automaker’s success in powertrain development, as well as Toyota’s hybrid racing experience. Toyota’s TS040 hybrid race vehicle, for example, features a unique regenerative brake system designed specifically for race applications. Energy captured from the braking system leading into a corner is stored in a super-capacitor, allowing it to be used for a boost of speed on corner exit.

In theory, this race-spec hybrid system should scale down to a production Supra. If this system were paired with a highly efficient turbocharged inline 6, it would allow the Supra to maintain a low curb weight (3,000lbs is the design spec for the FT-1 concept), maximizing both fuel economy and the vehicle’s horsepower to weight ratio. And with a ‘speed boost’ coming out of every corner, it’s easy to imagine a Supra attacking the race course just like a supercar.

Finally, the rumor is that the Supra is going to “be a Toyota,” meaning that it will be regarded as affordable (a relative term to be sure). Rumors peg the base Supra’s asking price in the $60k range, a number that squarely competes with the Corvette.

Will The Supra Really Compete With The Corvette?

On paper, the Supra is as fast as anyone wants to make it. It can have a 3,000lbs curb weight, 500hp, and sprinkle magical speed dust on every car it passes on the road. The next-gen Supra is still very much ‘vapor ware’, so talking about rumors surrounding the car as if they’re fact isn’t fair to the Corvette.

However, if we assume that:

We can hop in the wayback machine, travel back to 1998, and quickly realize that a new Supra is absolutely going to be a Corvette competitor. Consider the following comparison: 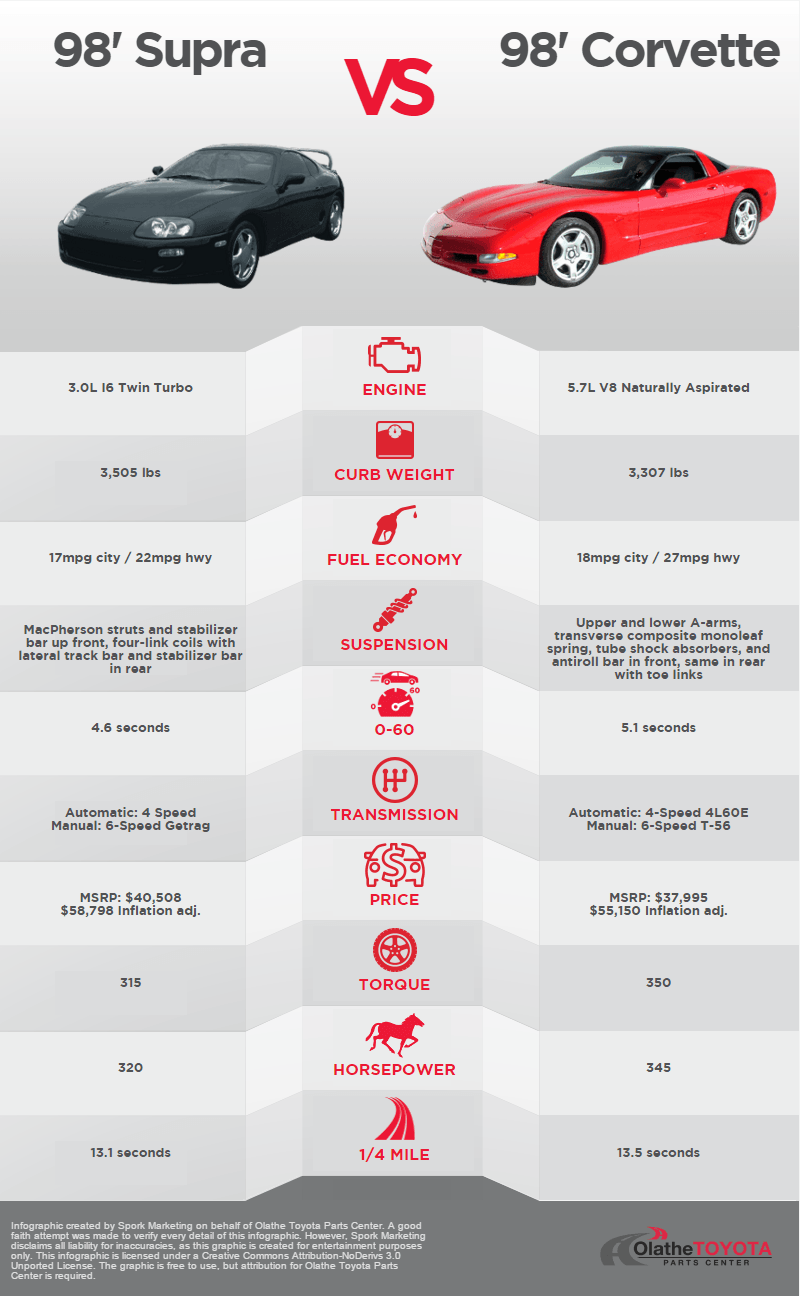 As you can see, everything about the Vette and Supra was close in 1998. Is there any reason to think that Toyota wouldn’t be benchmarking the Corvette right now? After all, the Vette is the king of the bang-for-the-buck performance mountain, and that’s a spot any automaker would love to occupy. Frankly, Toyota would be negligent if they didn’t set their sites on the ‘Vette.

Again – there can be no winner in a comparison between two cars when one of them doesn’t exist. Still, it’s fair to say this: Toyota has absolutely placed the Corvette in their sights. They’ve got a world-class partner in BMW, and they’ve got hybrid vehicle racing technology that just might make all the difference on the race track. If the next-generation Supra is anything like the last one, it’s going to be a serious threat to the ‘Vette.