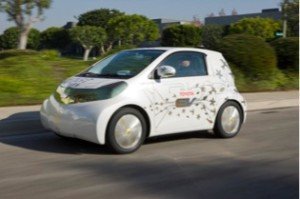 MSN Autos recently had an interesting article on electric vehicles.

While the article brings up some interesting points, electric vehicles as well as hybrids are paving the way for better fuel economy. In fact, the U.S. Department of Energy gave the following positive remarks for electric vehicles.

Too often we attempt to look for a single solution to our problems.

Electric vehicles are just one weapon in the arsenal to combat high gas prices. It’s going to take a variety of options including hybrid cars and trucks as well as vehicles powered by alternative fuels.

Toyota has been leading the way in building fuel-efficient vehicles. Whether it’s the Prius lineup of vehicles or the Camry or Corolla, which have made fuel economy improvements, Toyota is making a difference.

So are electric vehicles the future?

It’s hard to tell. But one thing is for sure… if we don’t try to make a difference it won’t get better.

What do you think about electric vehicles? Leave your comments below.

At Toyota Parts Center, we are your No.1 source for Toyota OEM parts and accessories. Find out more by visiting Parts.OlatheToyota.com.