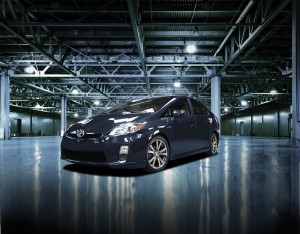 So the Toyota Prius is a big hit with another side of the automotive consumer market. High-end performance drivers and car buyers have always seemed to avoid the Prius. However, the new Prius PLUS package aims to show the fiercer side of the world-famous hybrid.

This new package will completely reinvent the options for the Prius that people are aware of. The package reworks several Toyota Parts already making the Prius great, while at the same time tweaking some exterior options that make the Prius more aerodynamic. Seven pieces, including the rear bumper, front bumper, hood, and several other parts, reform the well-known profile of the Prius. Everything about the Prius PLUS package has been aimed at giving the vehicle a more performance-oriented niche on the road.

Things under the hood have stayed mostly the same, although the suspension has definitely been tweaked. The new package drops the vehicle approximately 1.1 inches in the front and 1.3 inches in the rear in order to push the vehicle to its aerodynamic limits. The lower the center of gravity, the quicker the turns, and the greater acceleration the vehicle can experience coming out of a turn. The tires were adjusted, as well as reworked visually, and several different minor tweaks were applied to balance out the vehicle.

According to the post on the Toyota Parts newsroom, the new package will come in four of the popular Prius colors: Blizzard Pearl, Classic Silver Metallic, Black and Winter Gray Metallic. The added features of the PLUS make this the most fun-to-drive, performance-enhanced Prius while maintaining its industry-leading fuel efficiency.