We've teamed up with FactoryNissanParts.net to bring you this chart comparing a couple of 2017's new plug-in cars. Placing the 2017 Prius Prime and 2017 Nissan Leaf side-by-side reveals many similarities between these two emissions-reducing cars and some key differences.

Compare for yourself, and allow us to share why we believe the 2017 Prius Prime is the winner.

The Toyota Prius has long held the crown as the car for the budget-minded and environmentally-conscious consumer. Introduced in Japan in 1997, it has grown steadily in worldwide popularity and encouraged competition. Some companies have gone to all-electric vehicles, but Toyota keeps improving its hybrid.

For 2017, they created the plug-in Prius Prime (we introduced it here) with an 8.8-kWh lithium-ion battery pack, which has twice the energy capacity as previous Prius plug-in models. The new battery means the 2017 Prime offers drivers a 25-mile range in the EV mode.

In fact, the Prime has three driving modes: EV, which depletes the battery first; Hybrid, which saves that precious EV power for later; and EV Auto, which blends the two.

More than likely, 25 miles of EV range is enough to handle a daily commute. However, if drivers need additional range, the Prime’s 1.8-liter, 4-cylinder engine seamlessly takes over and adds another 615 miles to the range. Yes, the 2017 Prius Prime is still a hybrid, but it greatly reduces the owner’s oil consumption and boasts 133 mpge combined. The all-electric Leaf only does 107 miles before requiring a 3-6 hour charging session, depending on the charger used, and offers 112 mpge.

Looks Aren’t Everything, But…

The 2017 Prius Prime has a bold, new look. No longer just an efficient mode of transportation, this Prius is almost sporty. The same cannot be said for the Leaf as its style remains almost unchanged and pod-like in appearance.

Of course, the Prius Prime’s looks have a purpose: the new rear glass “dual wave” shape and the automatic grille shutters contribute to the car’s aerodynamics and reduced wind noise. Toyota says the Prime’s drag coefficient is .24. It speeds to 84 mph in EV mode and hybrid mode increases that to 125 mph. The 2017 Nissan Leaf looks almost identical to past years’ models, and the Leaf’s drag coefficient remains at .28 and it tops out at 93 mph.

Also improving the ride are the Prime’s suspension and steering. The front coil-spring assisted struts and rear double-wishbone suspension has been tuned and stabilized to provide a smoother ride. Reviewers have been pleasantly surprised, noting improved turning, steering, and responsiveness. 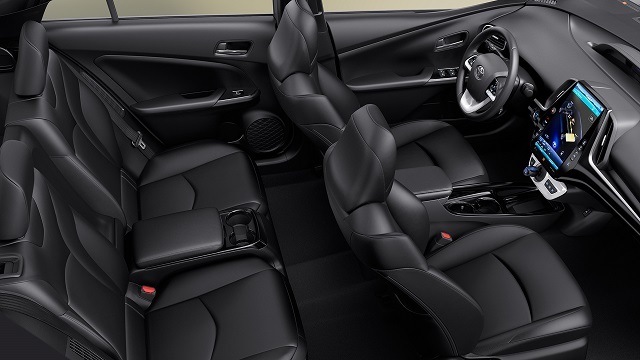 Toyota moved the battery in this newest Prius, so the Prime seats only four but does so with plenty of shoulder, head, and legroom for average adults. The Prime has heated front seats and full-speed range dynamic cruise control. While both cars have brake assist, the Prime has a pre-collision mitigation system the Leaf does not. In fact, the 2017 Prius Prime has received a 5-star safety rating from the NHTSA while the Leaf received only 4 stars.

All About The Price Tag

Both cars reduce emissions enough to guarantee buyers a federal tax credit, and additional state or city incentives may be available. It all depends on where you live.

For those ready to reduce oil consumption and car emissions, either option is a good investment; however, the Toyota Prius Prime is the next evolution in this proven hybrid technology, looks appealing, is a safer car, and far better priced. The Prime is the clear winner.