The fuel injectors are an important part of your Toyota's fuel system, delivering gasoline to the cylinders for combustion. Modern injectors are designed to last a long time but eventually wear out and need to be replaced to maintain your engine's performance. In this guide, we'll cover fuel injectors and answer the following questions:

What Is A Fuel Injector And Why Do They Go Bad?

A fuel injector is a device that sprays a high-pressure stream of atomized gasoline into the engine's combustion chambers. It works using the same principle as a nozzle on a spray bottle. This spray is timed and metered to maximize combustion so the engine delivers optimum performance. The fuel injector is a separate component from the fuel pump, which moves gasoline from the fuel tank to the injectors.

Fuel injectors can eventually wear out or get clogged with impurities, reducing their performance. When a fuel injector's performance is reduced, it sprays less fuel, causing your engine to produce less power.

How To Diagnose A Bad Fuel Injector

If a fuel injector goes bad, it's either due to an electrical or mechanical issue that causes one or more of the following symptoms:

If your Toyota's check engine light is on, you can use an OBD-II scanner to troubleshoot these issues. For fuel injectors, these fall into one of two categories:

If you have questions about diagnosing a bad fuel injector, check out the article at this link.

If you want to save money up front, it's tempting to buy aftermarket fuel injectors. However, OEM Toyota fuel injectors can save you more money in the long run for these reasons:

You can read this comprehensive blog for more info on OEM vs. aftermarket fuel injectors.

How To Replace A Bad Fuel Injector 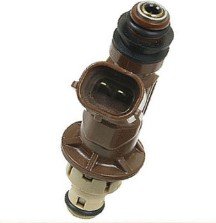 If you've got questions about the fuel injectors in your vehicle, or need assistance in finding the right OEM parts, just give us a call!