For the last couple of decades, the Toyota Camry has been the best-selling sedan in the United States. Know what's interesting? The Toyota Camry is also the most expensive sedan among its competitors. This goes to show that overall value is the determining factor in how well a car sells. 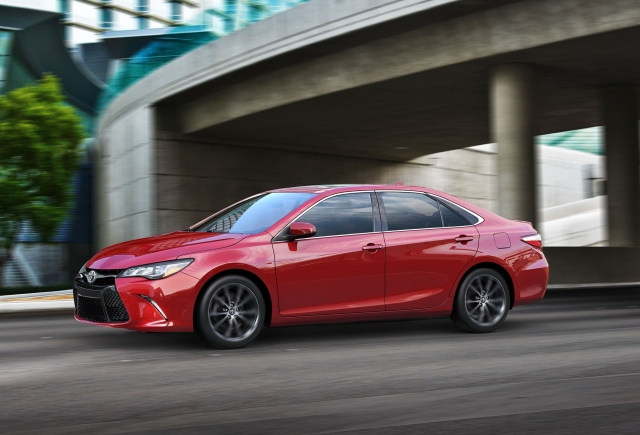 The Camry packs a lot of value. It has many exceptional features:

Most other vehicles are hard-pressed to match this sedan's value. While some other cars come close, the Camry still maintains the lead in the United States.

When Toyota Motor Sales USA was formed in 1957, they sold only 288 vehicles:

The vehicles after the original Crown and Land Cruiser offerings saw similar results, which were far from encouraging. Toyota had to change their tactics to appeal to American drivers. They tried to offer an economy car, but it didn't work. Americans had not come to appreciate this desirable trait in an automobile. Even the Toyota Corona, developed for Americans in 1966, did not make any major sales until the country was in the throes of the oil crisis of the mid-1970s.

Toyota discontinued the Corona in 1983. This could have left Toyota without a mid-size sedan in the American market, but Toyota offered the Camry the same year. At the time, the Toyota Corolla compact sedan was gaining popularity. It held the title as the world’s most popular automobile since 1966. Yet, it was only a compact car.

The Camry Became Popular In 1997

Toyota introduced the Camry in 1983. It was the perfect successor to the first two popular Toyota economy cars in the United States. The Camry’s heyday, however, would not come until 1997 when Toyota introduced the second-generation mid-size Camry. That's when the Camry took the crown (pun intended) as America’s best-selling sedan.

How The Camry Got Its Name

The Toyota Camry may have debuted in the United States in 1983, but it was not the first to bear the name “Camry.” That name had its roots a little earlier when Toyota rolled out the Toyota Celica Camry. The Celica Camry was a sedan version of the popular Celica coupes and hatchbacks introduced in 1979. It was only sold in Japan. A couple of years later, the Camry split off into its own model line.

The name "Camry" is an anglicized form of the Japanese word for crown, “kanmuri". Toyota had a habit of giving its models "royal" names. A few examples:

The Camry has been around for almost 40 years. Let's take a look at its journey through the years: 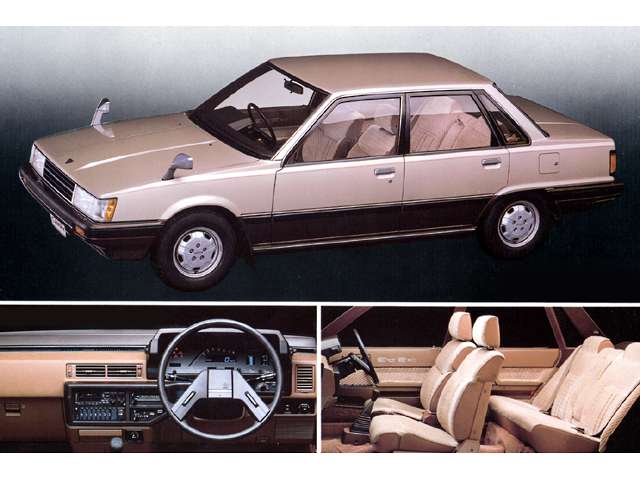 Like its predecessor (the Corona), the Camry was designed for American drivers. At least by Japanese standards, the Camry was a large and overpowered car. The first- and second-generation Toyota Camry was made available as a four-door sedan or hatchback.

As far as its design went, Toyota followed the boxy car designs of the era. The design changed very little over the first decade or so, from 1983 through 1992. The Camry's design was perhaps what one might call “for the masses". In other words, it was made to appeal to as many as possible, neither overly daring nor overly utilitarian. The focus here was to provide functional, comfortable, and reliable transportation. And Toyota nailed it with the Camry.

The Toyota Camry, in comparison with other early-1980s carbureted engines, offered standard electronic multi-port fuel injection. This feature improved fuel economy and power. It also helped the car meet increasingly strict emissions regulations in the United States. The majority of Camry cars were powered by 1.8L or 2.0L four-cylinder gasoline engines. The unique combination of power and light weight made for an exceptionally spirited drive. There was also the rare 1.8L or 2.0L turbodiesel four-cylinder engine option. Any of these options were mated to a five-speed manual or four-speed automatic transmission.

In 1988, Toyota introduced the first 2.0L and 2.5L V6 gasoline engines to the Camry. These engines featured: 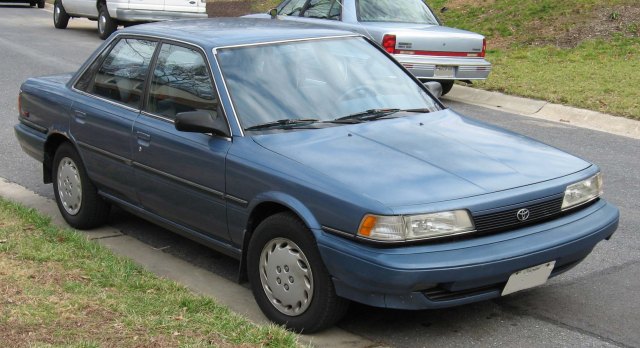 The early 1990s saw a shift in Toyota Camry size and design. This shift moved the Camry to a mid-size sedan platform in the United States, The Japanese version persisted as a compact for a few more years. By 1991, Toyota introduced the following features to the Camry:

In 1991, Toyota offered a coupe version of the Camry, but it never gained traction. The Coupe was subsequently dropped in 1996, only to be reintroduced in 1999.

In 1992, Toyota redesigned the Camry again. This model was six inches longer and two inches wider. The expansion of space gave the Camry even better legroom and shoulder room than before. This added to the appeal of the Toyota Camry in the American market. Interior and exterior styling moved away from the earlier boxy designs to more rounded shapes.

The larger body meant more weight, of course, and Toyota upgraded engine offerings. The Camry began running either 2.2 L i4 or 3.0L V6 gasoline engines. Here's a fun fact: the 3.0L version went on to form the basis for the Lexus ES 300.

In 1997, careful attention to noise and vibration led to several enhancements to driver comfort, including:

The previously-introduced 2.2L i4 and 3.0L V6 were carried over, albeit with enhancements, from previous years. Toyota started offering a TRD supercharger as an add-on for the V6. The early-1990s body curves were dropped in favor of a more aerodynamic wedge design. The following features became standard on most of the Camry lineup:

Audio systems were upgraded from previous generations of AM/FM/Cassette to include CD players and CD-changers.

Toyota dropped the Camry station wagon body style in 1997. In 1999, Toyota reintroduced the coupe, along with a soft-top convertible variant. This variant received the name Camry Solara. Its style was so drastically different that most simply refer to it as “Solara,” dropping the “Camry” altogether. To deliver the most sporting ride, Toyota retuned the Solara in powertrain and chassis to deliver better all-around performance. 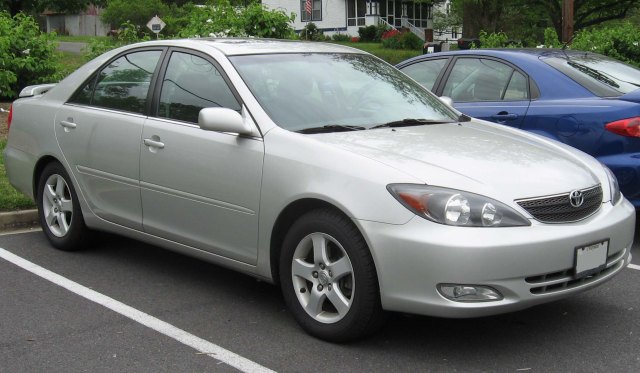 Toyota refreshed the Camry in 2002 in an attempt to make it more elegant. Here are some of the biggest changes to this sedan:

In 2005, Toyota upgraded the Camry's transmission from a four-speed automatic transmission to a five-speed. Toyota also made these previously optional items standard across the lineup:

In 2007, the Toyota Camry was completely redesigned. It now featured a distinctive angular form and better aerodynamics. Under the hood, the 2.4L i4 was carried over from previous years, paired with a five-speed manual or automatic transmission. The V6 was upgraded again to a new 3.5L paired exclusively with a six-speed automatic transmission.

The Debut Of The Camry Hybrid

Along with the redesign in 2007, Toyota debuted the Camry Hybrid. This exciting new model featured a powertrain similar in design to the decade-older Toyota Prius. The Toyota Camry Hybrid had all of the same features as the conventional Toyota Camry, except for these hybrid-specific features:

The Toyota Camry Hybrid was one of the first mid-size hybrid sedans that offered exceptional fuel economy without much sacrifice.

Toyota kicked off the fifth mid-size generation in 2011 by dropping the manual transmission in favor of a standard six-speed automatic transmission with manual-mode capability. Over the next couple of years, the Camry saw more improvements, including:

Toyota started offering optional features that rivaled even some of the luxury offerings, such as:

When Toyota rolled out the seventh generation in 2012, we saw some changes. Here are some of the most notable ones:

In the early years of the seventh generation (2012-2014), sales were strong, Yet, critics placed the Camry low on their lists of comparable sedans. This prompted Toyota to reinvent the model.

Even though the 2015 model year was still in the seventh generation, Toyota made some aggressive changes to it. In fact, Toyota said that the roof was the only exterior component left unchanged. Toyota gave the 2015 year model a sportier, more aggressive appearance and a more modern interior. Yet, it kept the engine from the previous year models, so performance didn't change much.

In 2020, Toyota released a new Camry TRD model with a sportier appearance and a firmer suspension system.

The Toyota Camry Has Come A Long Way

Today, the Toyota Camry rivals many luxury cars for:

The best part? The Camry is a fraction of the cost of luxury cars. Compared to vehicles of its own segment, the Camry straddles the line between radical and mundane well. It's neither overly daring nor boring. Other family sedans, both hybrid and conventional, may offer more style, more sport, or more luxury, yet at the sacrifice of something else. Yet, the Toyota Camry could just be the perfect combination of features that families are looking for in their daily transportation. Keeping all of this in mind, the Camry does not seem like it will easily give up its spot as the best-selling sedan in the U.S. for the foreseeable future.