The first Toyota 4Runner was sold in 1984 and ever since, offroad fans have laid claim to this iconic vehicle. What’s new in 2013? Styling and comfort to name a few. 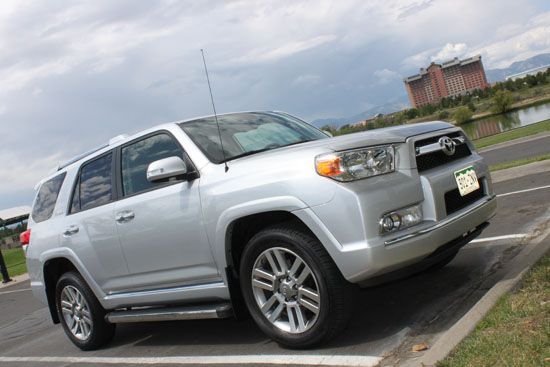 Mountains AND city? Yep, it can handle both.

Toyota sells around 45,000 units each year and while that doesn’t make it a top selling model for them, it is one of those vehicles it is known for. The 4Runner has long been an offroad lover’s dream with its combination of body on frame construction, slender width, great clearance with locking differential options. Plus, the darn thing takes a beating and keeps going. Taking a trip in the Colorado Mountains, it is easy to find an old 4Runner that is most likely been modified to be a trail warrior.

Nowadays, Toyota offers the 4Runner in three different trim lines. The base SR5 is the standard and most popular model accounting for close to 60 percent of its sales.

Next, is the Trail edition. This trim level comes with some great exterior changes in a hood scoop and distinctive bumpers. What is really exciting about this model is the available CRAWL feature, A-TRAC traction control and locking differentials. It accounts for around 20 percent of sales, but it is definitely the “offroaders” choice.

Lastly, is the Limited model – the one I was given to review. It comes with chrome door handles and bumpers, heated mirrors, an optional running board (my review vehicle had it) and a moonroof, standard. It also comes with the larger 20-in., 6-spoke alloy wheels (the others have 17-in.). On the interior, it has leather, dual-zone climate control, Entune Premium JBL audio system with navigation. While there are other differences between the trim levels, those are the big ones.

As with most exteriors, beauty is in the eye of the beholder. I will say that my initial take on it wasn’t favorable. It simply looked like the headlights were too curvy and it was really boxy. However, after driving it for a week, I came to like the distinctive look. It really stands out on the road.

The chrome accents are a take it or leave it item. Toyota did do a nice job of balance with it and the chrome doesn’t come across as gaudy.

Lastly, the roof rails are a great feature and it is easy to see a pair of skies or some bicycles riding along the top. 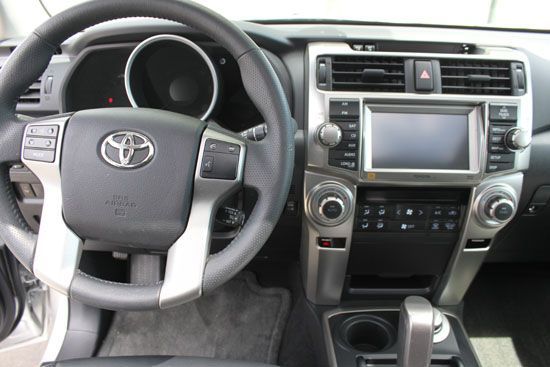 The interior feels cramped because it is. However, it does have nice interior features and leather seating.

On the inside, the leather trim is nice and it really has the feel of an upgraded vehicle. This is a 4Runner that you could go out on the town on a Friday night and then go muddin’ on Saturday.

The controls are a bit cramped and driving it, the sitting angle felt really low. While this is a preference item, it will take some time to get adjusted to. I would venture to say that a larger person will have difficulty getting comfortable with the cramped feel.

One of the cool features of the 4Runner has long been the sliding rear window. Never fear, it is still a feature and Toyota has added a pretty interesting “party” mode. With a push of this button all the sound is transferred to the tailgate. The idea is that if you are out enjoying the outdoors, you can pop your tailgate and listen to your music with little effort.

The 4Runner lacks some of the refinement that other unibody SUVs now have. Yet, that is what makes it great. It is one of the last body on frame SUVs on the market which means it really can take a beating. Confused on the terminology? Other SUVs are built like cars and the 4Runner is built like a truck.

With that said, it does drive like a truck. In the city or on the highway, I felt like I was driving a Tacoma (midsize truck) more than driving an SUV. Its not a long-road trip take the family kind of vehicle. It is a go to work and then play in the mud with friends type of SUV.

The truth with the 4Runner has long been that it is a niche vehicle built for a small market. If you are part of that market, you are in luck with Toyota continuing to support the 4Runner. If your not, this vehicle may not be the right one for you. But, who knows, I didn’t know I enjoyed offroading as much as I did driving this 4Runner!