Lexus has been one of the best-selling luxury-car brands in the United States several years now, and has somehow managed to keep up with the competition (primarily BMW and Mercedes) despite a lack of new products and public perceptions. In many minds, a Lexus is considered to be an “old people’s car”, and some say Toyota’s luxury vehicle division has trouble attracting younger consumers (only there is room for debate on this point). 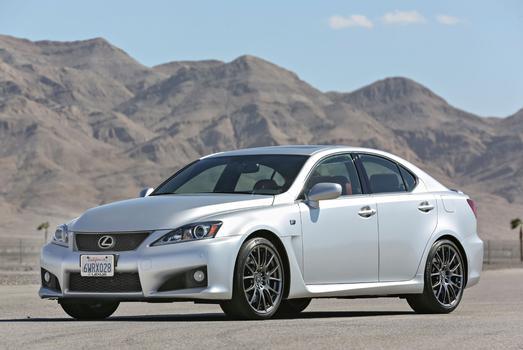 Setting aside age concerns, it seems likely that Lexus is suffering from stiff competition offered by BMW, Mercedes-Benz, and Audi. Up until 2010, Lexus was the top-selling luxury-auto brand in the U.S., but in 2011 and 2012 it was overcome by BMW and Mercedes, with Audi sniping away at Lexus market share. As a result of these sales and market share losses, Lexus is working to regain their sales crown by attracting younger buyers.

The New Lexus IS Is The Key To Attracting Younger Buyers

The first step in the Lexus revitalization plan is to give the brand a new, fresh look. The latest Lexus IS model, now in its third generation, exhibits the new “design language” that future Lexus models will share. The 2014 Lexus IS features a new spindle grille, along with smooth, curved lines on the rear end, and some sharp, aggressive lines in the front. The front end gives the car a dynamic, sporty feel, something that helps to attract a younger buyer.

As far as performance is concerned, the new Lexus IS 250 comes up short. It’s powered by a 2.5-liter V6 engine paired to a six-speed manual shift electronically controlled transmission. The problem is, this entry-level V6 is sluggish. The specs aren’t bad, but the engine doesn’t stand up to direct comparisons with Audi’s A4 (which packs a sporty 211hp turbocharged 4-cylinder), BMW’s 180hp 4-cylinder (paired with an 8 speed transmission that squeezes every drop of power out of the motor), or the 201hp C-Class sedan from Mercedes, which is paired with a 7-speed. Toyota needs to breath some more life into this V6, or perhaps switch it out for a turbocharged 4 that packs more punch.

Lexus did get one thing right – younger buyers like all-wheel-drive, and that’s an option on the new IS. The new IS is also much sportier than its’ predecessor, with a very rigid chassis and a new multilink rear suspension.

In addition to reinventing the IS, Lexus is also attempting some good old fashioned “guerilla marketing,” opening special Lexus showrooms in cities across the world. These showrooms aren’t for selling cars – they’re a lot like cafes or lounges, where visitors can have a cup of coffee, take a look at some of the cool artifacts on display, and learn more about the brand in a passive, non-confrontational way (the anti-thesis of your local Lexus dealership, where salespeople are likely to pounce). This is another attempt to reach younger buyers, who often dislike interactions with salespeople.

While it’s far too early to know if younger buyers are visiting Lexus showrooms, there are reasons to be positive. In August, 2013, Lexus saw a 23 percent increase in monthly sales in the U.S., with a total of 29,729 units delivered. They also sold more vehicles than Mercedes-Benz and BMW, the first time that’s happened in more than two years. Of course, Lexus was trailing BMW and Mercedes-Benz most of the year, so it’s important not to get too caught up in one month of sales results.

While Lexus isn’t likely to regain their sales crown this year, their new design language, their investment in the IS, and their attempts to build the Lexus brand among the younger crowd are all likely to pay off in the long term. If Lexus can continue to produce vehicles with industry-leading quality, while simultaneously keeping their brand fresh and innovative, they’re going to be a strong contender in the Luxury segment for years to come.

Jordan Perch is an automotive fanatic and “safe driving” specialist. He is a writer for DMV.com, which is a collaborative community designed to help ease the stress and annoyance of “dealing with the DMV”.