Serious question: If you could take any vehicle with you through the Zombie Apocalypse, what would you choose?

Be Ready! Find the OEM Prius Parts You Need Here× 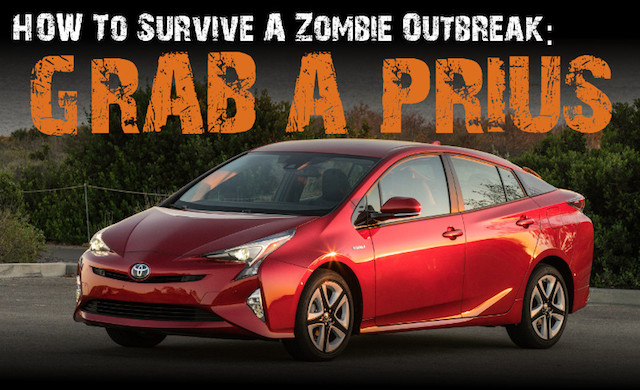 A knee-jerk reaction might be an army tank, but they’re not great on gas, they’re loud, and you’d have to step into the world sooner than later. A hulky car like a Hummer or a big pickup can be a speedy and powerful option, but again the fuel economy/volume situation might leave you stranded.

Our choice? The Prius. Yes, the almighty Prius will reign supreme when the undead rise, and the smartest of us will live and die by the hybrid. Here’s why:

A new Prius holds 11.3 gallons of gas and gets up to 53 mpg. For those counting at home, that’s a whopping 598.9 miles you can travel on a full tank. In a post apocalyptic wasteland where gasoline is the equivalent of gold, a single tank will take you further than just about anything else.

According to Toyota, 95% of all Prius models sold since 2005 are still on the road. That means parts are readily available and probably as simple to get as finding the nearest abandoned Whole Foods parking lot.

Okay, so a Prius might not kill at anyone. But it’s nearly silent at slow speeds, making it the ideal tool for sneaking past hordes of blood-thirsty, mindless zombies. Or sneaking up on other camps and stealing their supplies.

With a plug out kit like this one, your Prius will turn into an efficient, quiet power source for days on end. And with power during the Zombie Apocalypse, you’ll have all the power against the undead.

Let’s say you find yourself alone with a Prius in the wake of a Zombie outbreak. It’s roomy enough that you can pick up a botanist to help grow food, a molecular biologist to figure out a cure, a mechanic to swap out parts, and a muscled dude with a battle axe for protection.

While the lemon cars of the world will quickly break down and rust on the side of barren highways, the always reliable Toyotas will still grace the roads of the world. Should the unthinkable happen, you can count on your Prius as your primary means of survival.