5 Reasons a Tracked Toyota is Better Than a Snowmobile

At the 1997 Detroit Auto Show, Toyota displayed a 4Runner fitted with a track driving system that was inspired by a 1995 concept called the Mogul. While there were rumors of a production track system being released during the 1998 Winter Olympics (Toyota was a major sponsor), the idea sadly never came to fruition. 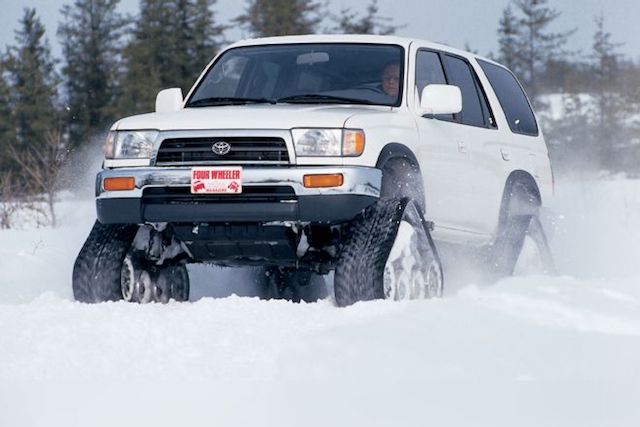 If only Toyota released this awesome track drive system for production vehicles, via FourWheeler

But the good news is that other snow track brands exist, and they offer tracking solutions for your Toyota.

Snowmobiles are amazing creations, but they’re not ideal vehicles for people such as farmers and law enforcement officers.

Here are a five reasons a tracked Toyota is a better option for many:

A Toyota truck or SUV sporting a set of four snow tracks instead of tires is called a tracked Toyota, and it operates like a snow cat off the beaten path. A tracked Toyota can go up to 40 miles per hour and drive over deep fresh snow, ice, sand, and mud. It’s an ideal vehicle for hunters, ice fishermen, farmers, off-road enthusiasts, and law enforcement officers in snowy climates.

How to Add Snow Tracks to Your Toyota

Want to put snow tracks on your Toyota? You have two different options:

There are three brands sold in America to turn your Toyota into a tracked vehicle: American Track Truck, Mattracks, and Track N Go.

Some Things to Keep in Mind

Of course, there are a few disadvantages that come with owning a tracked Toyota:

Got a Tracked Toyota?

If so, we definitely want to see pictures of it. Head over to our Facebook page and share ‘em with us!