Did you know that the Land Cruiser is Toyota’s longest running series? It celebrates its 66th birthday this year.

Currently marketed as a “luxurious bridge between civilization and adventure”, the Land Cruiser has come a long way since its days as a rugged utilitarian vehicle. Want to know what Toyota’s highly coveted SUV was like back in the days? Just check out these vintage ads! 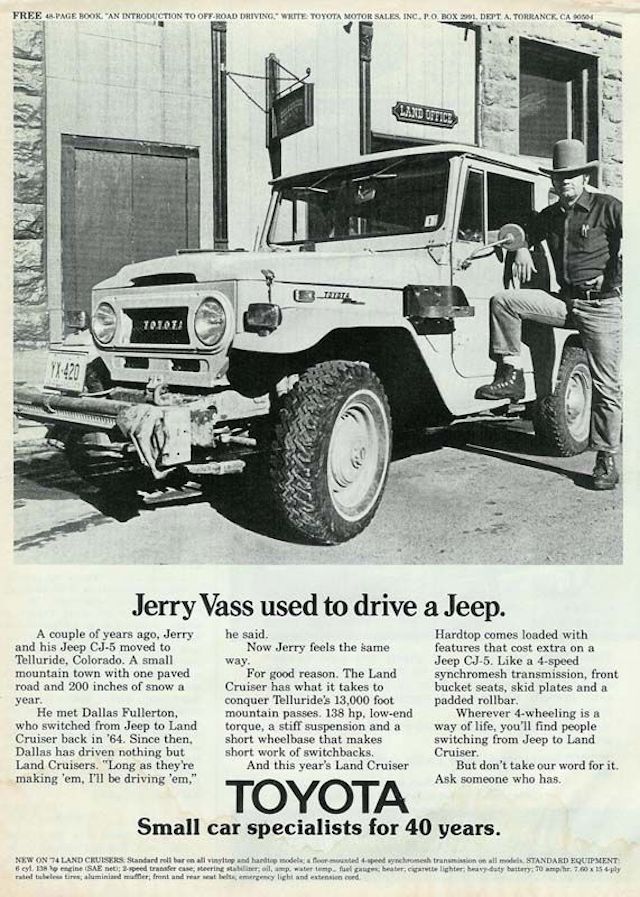 Who’s Jerry Vass? We don’t know, but we know what Toyota was trying to do here. They took a regular Joe – erm, Jerry – and did a short story on how he switched over to a Land Cruiser to accommodate his outdoorsy lifestyle. How could anyone not want to be like this rugged gentleman posing next to his mighty big FJ40? Toyota - 1, Jeep - 0.

The Pro Way to Go 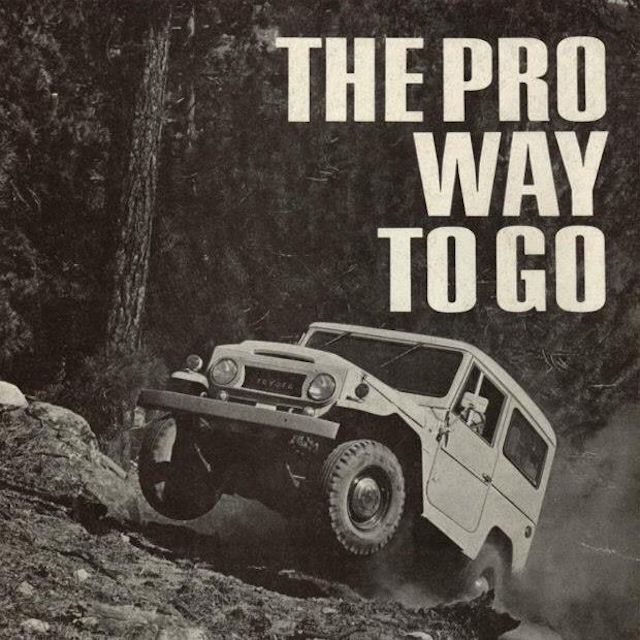 A picture is worth a thousand words. Along with the slogan in this ad, the picture shows that a Land Cruiser will take you anywhere you want to go. What more could an off-road enthusiast want? 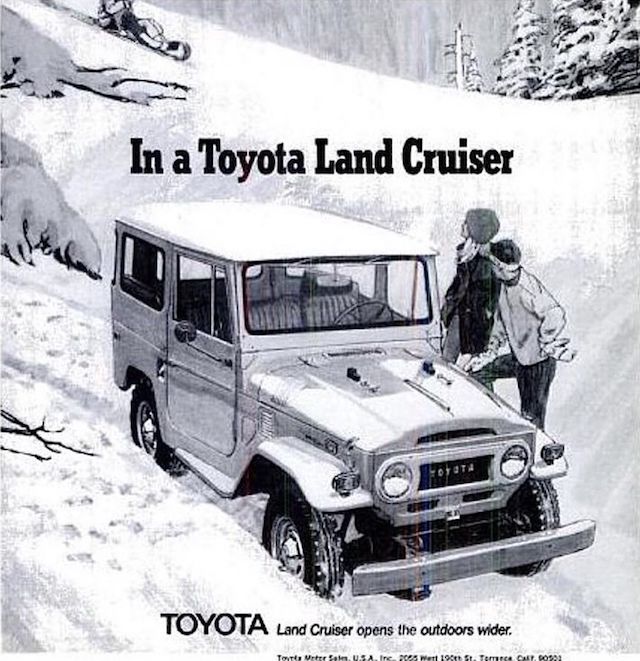 We love the simple yet powerful message in this ad. With only a few words, Toyota managed to convey that the Land Cruiser was what you needed to navigate raw land and broaden your horizons. The picture adds to the message by showing that you could even do it in the snow!

Gets You There… Gets You Back! 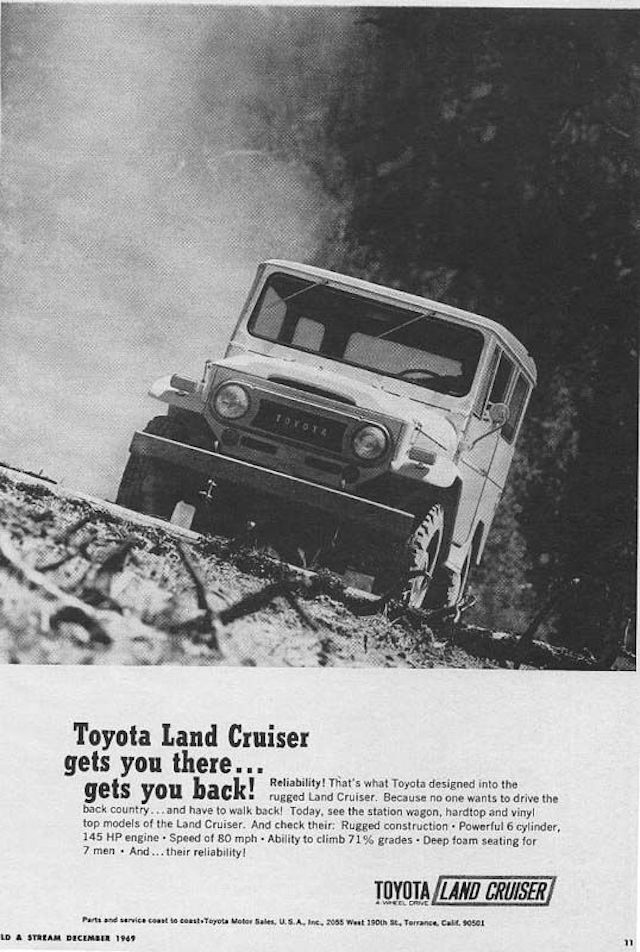 This ad may be nearly 50 years old, but it has convinced us to get our very own ’69 Land Cruiser. Where can we find one?

This is Not a Car 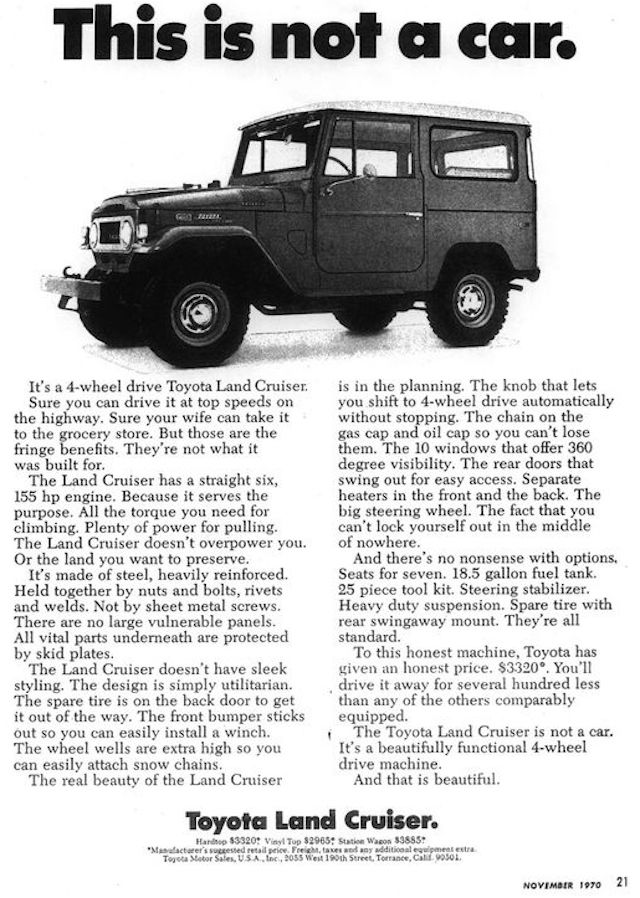 Described as a “beautifully functional 4-wheel drive machine” in this November 1970 ad, the Land Cruiser was built at the time as a utilitarian vehicle. We find it funny that Toyota heavily emphasized in this ad that the Land Cruiser was not luxurious, but in fact a big mean machine built to conquer all kinds of land. Little did Toyota know that their rugged SUV would eventually turn luxurious down the road!

Read it and Weep, Jeep 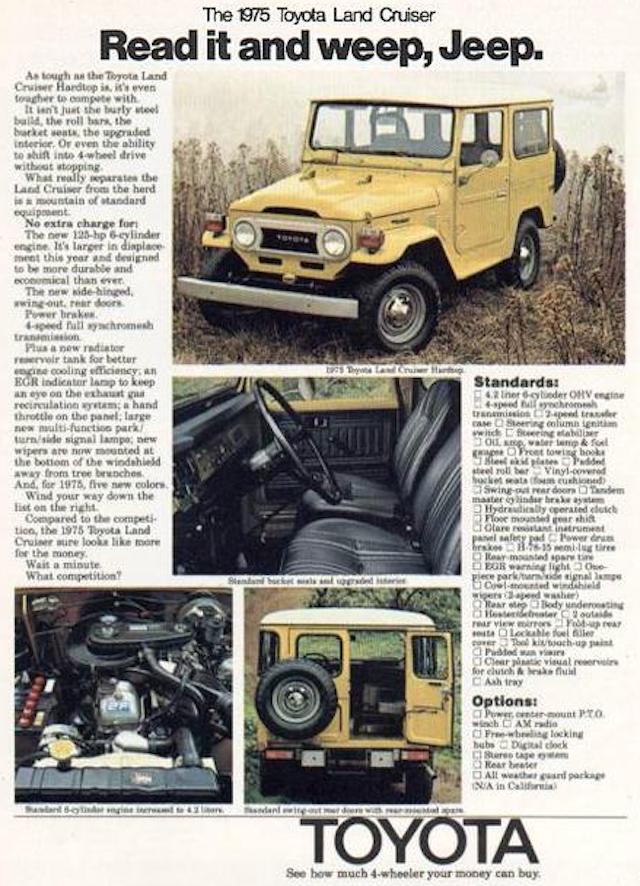 In this ad, you can see touches of luxury, such as the leather seats and an all-weather guard package listed as one of the options. We see some striking similarities between this year model and the 1975 Jeep, which also sports round headlights, the same style front bumper, and a boxy windshield. When you compare the two, it’s clear that the Land Cruiser is the more luxurious option. So this jab against Jeep was justified, in our opinion.

You Asked For It. You Got It. Muscle. 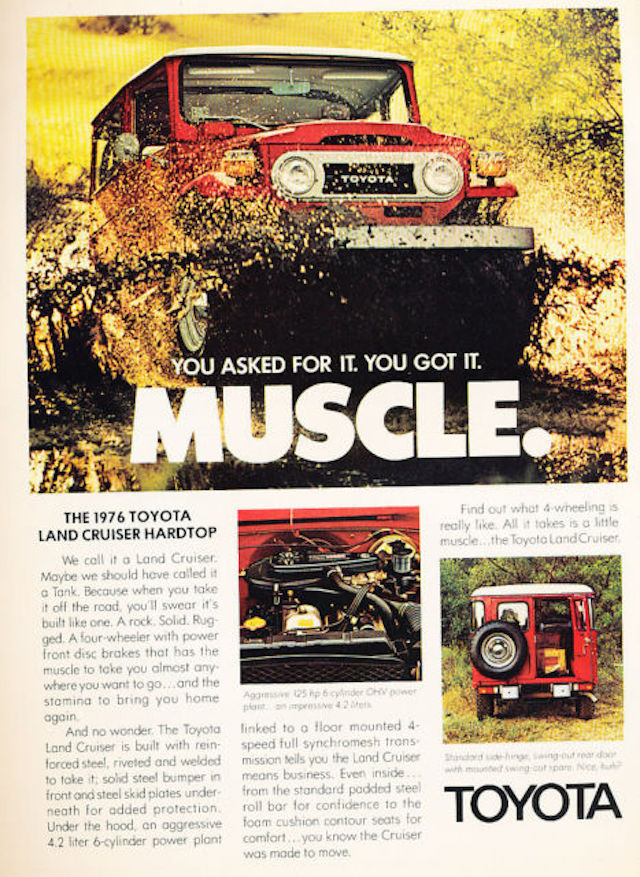 “Maybe we should have called it a Tank,” Toyota mused in their 1976 ad. We agree. Why didn’t they? Here’s a fun fact: Toyota developed the Land Cruiser because the United States Army asked them to build a military light utility vehicle during the Korean War.

Rugged Rig. You Got It. 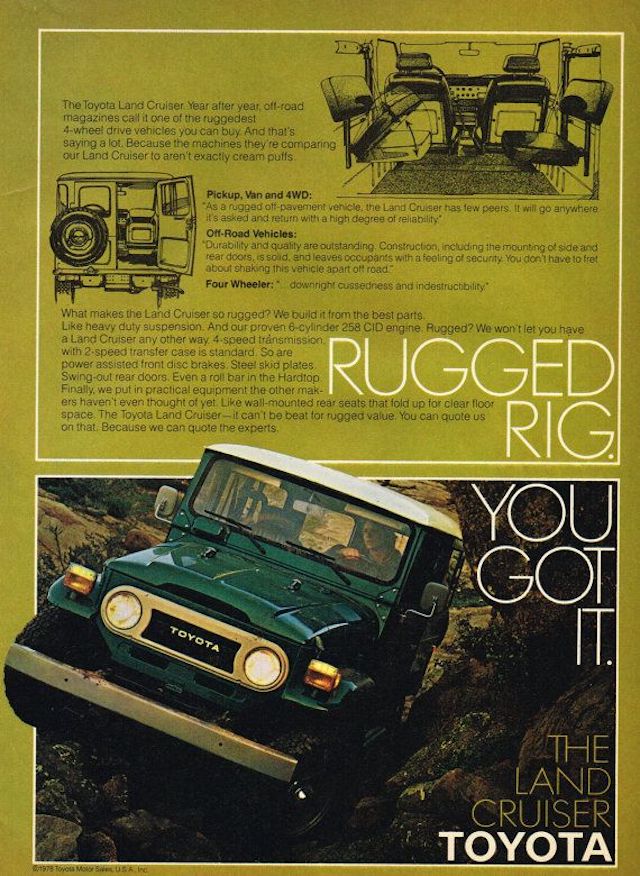 How come there aren’t side doors anymore? We’d love to see Toyota bring them back. Until they do, we’re in the market for a 1979 Land Cruiser. Anybody selling one?

We Don’t Play Games With Options. 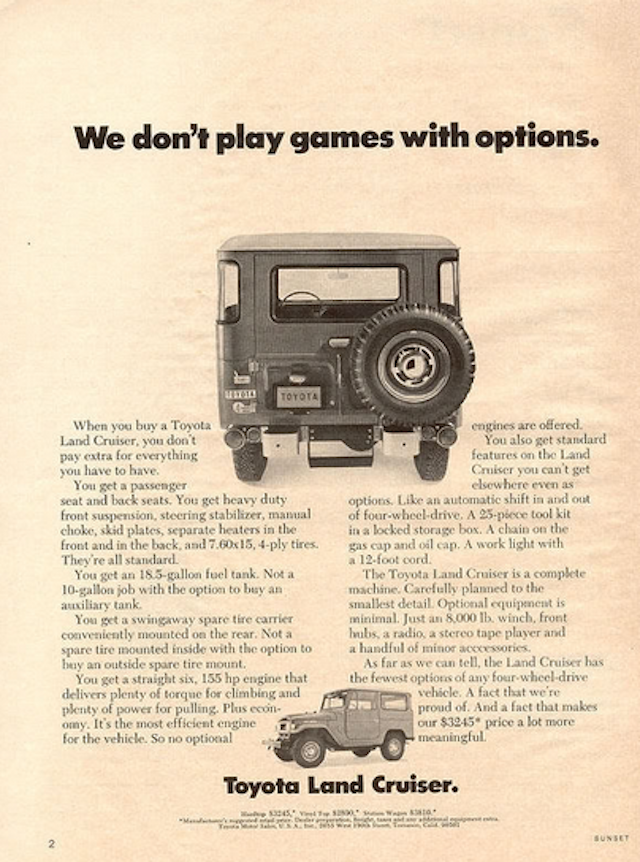 This ad stands out to us because Toyota emphasizes the fact that they didn’t offer options because their ’81 Land Cruisers (FJ40s were produced in other parts of the world until 1984) already came fully equipped with the best of everything. The catchy headline, the short write-up, and the simple message make this a brilliant marketing piece. 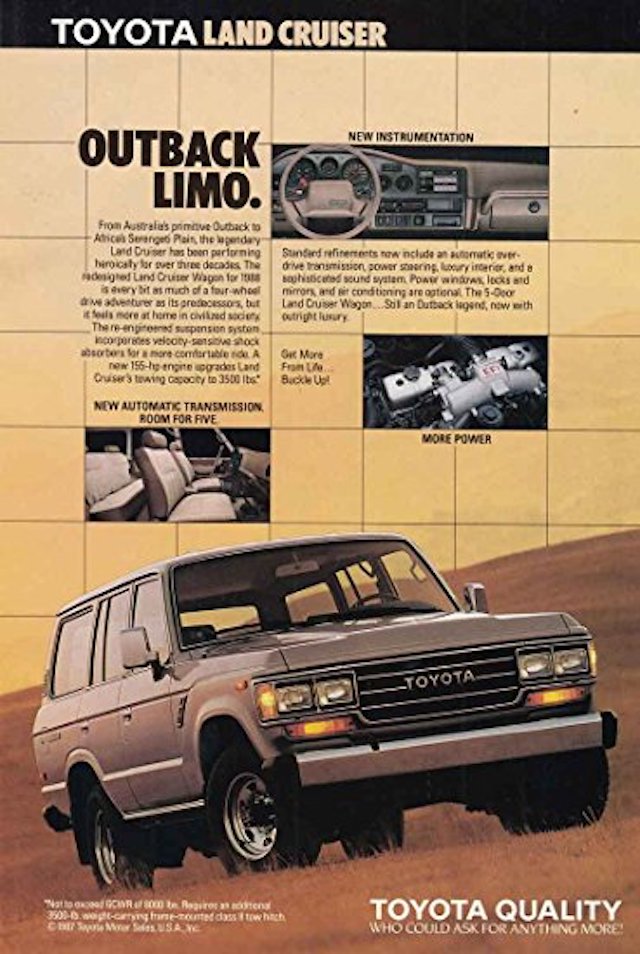 Toyota’s marketing team back in 1988 conjured up the two perfect words to describe the Land Cruiser: outback limo. Nothing more needed to be said.

Which of the ten ads listed here stands out to you the most? Let us know on Facebook!