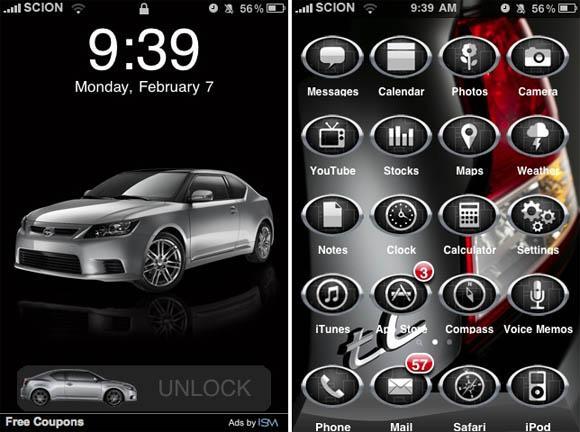 Toyota recently unveiled and launched a new advertising campaign, this time focusing on the minority of ipod touch/iphone users who have jailbroken their phones. They launched a “theme” through the Cydia jailbroken app store, and became what some say the first legitimate company recognizing that side of the Apple community.

For those not 100% tech savvy, jailbreaking might seem like a pretty shay thing to do. When Apple puts out the devices they are famous for, they lock down the software to block any app installs that aren’t from the Apple App Store. Users and developers around the world have found ways around this, and said “Jailbreaking” allows users to side-load applications as well as change the look and feel of an iOS device. While this has been around for a while, many companies and organizations have looked down on the procedure, especially Apple.

When Toyota wanted to launch this theme, based around their Scion brand, they contacted the advertising company Velti. The company developed the theme, and then proceeded to publish it to the Cydia app store. Velti was having communications with the Cydia marketers since April of Last year, so this project was obviously well thought-out on Toyota’s part.

The interesting part of the whole story, however, is that this week, Toyota pulled the theme from the Cydia Store. Allegedly, Toyota recieved a letter from Apple asking them to remove the theme. Toyota, wanting to keep their relationship with Apple in good standing, bliged. In a statement to the maintainers of techblog Jalopink, Toyota stated “At no point did Apple ask us to end/remove the “jailbreak” component of our campaign. The campaign ended at the end of March as scheduled. Overall it was a very interesting experiment that extended advertising to reach a new, unique audience.” Valti, on the other hand, said in several emails to cydia maintainers that the theme was pulled directly after a volley of emails and phone calls from Apple.

This advertising campaign was aimed to grab attention of those who love to customize. Scions, like jailbroken Apple products, are known for the different features like Toyota Parts and Toyota Accessories that can be added/removed to make the experience more personal for the end user. Don’t forget to run by your local Kansas City Toyota Dealership to get some great deals on Toyota Parts<, a> and Toyota Accessories.