Lexus builds some of the world’s most reliable vehicles, but Baja 1000 reliable? You bet. Joe Bacal and his racing team just won their second consecutive victory in a modified LX 570. Here is the story and our interview. 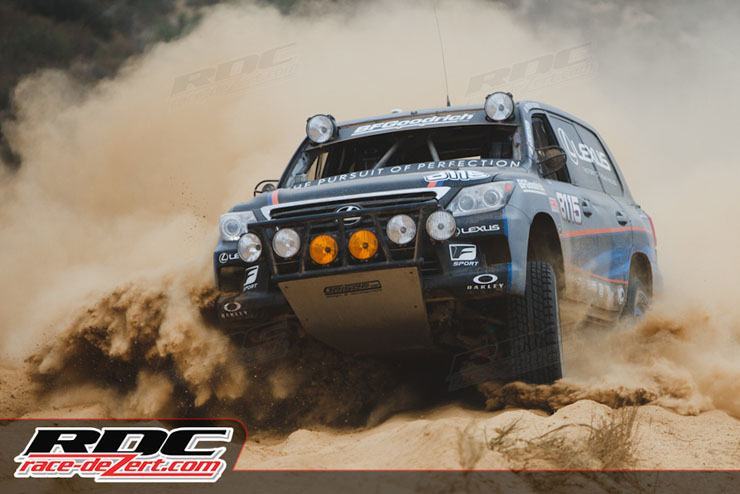 This is one serious Lexus and isn’t like anything you would normally think that a Lexus could do.

Joe Bacal has been racing since he was a kid. He took his love for cars to Toyota where he was a new model test driver for quite some time. He is also a cancer survivor who refocused his energy on racing. He runs JT Grey Performance Driving company that offers many things from ride and drive programs, vehicle testing, commercial – film, training and other services.

The Baja 1000 is a punishing 1,122-mile race that covers a broad stretch of desert along Mexico’s Baja California Peninsula. In 2012, Bacal drove the entire course with the help of three different co-drivers. His winning time was 38 hours and 22 minutes with no rest stops. Incredibly, the LX 570 didn’t suffer from any mechanical issues, not even a flat tire — impressive when you consider the course route is notorious for booby traps and vandals. 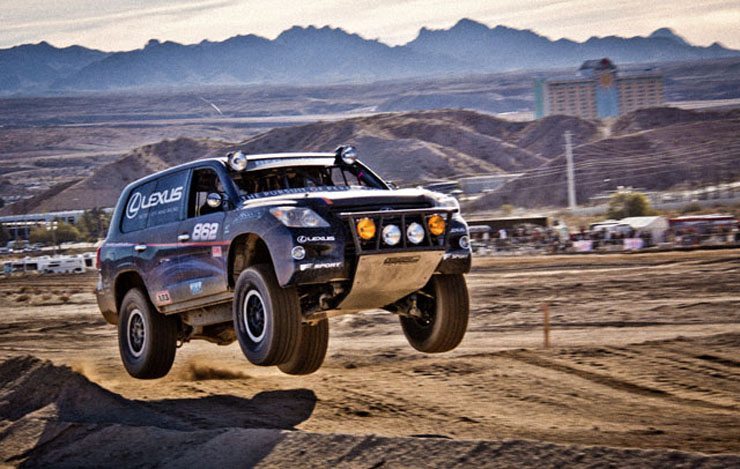 This is quite the Lexus “truck!”

A friend of the site, Joe Bacal’s wife sent us an email on how he won his second consecutive Baja 1000 race.

His wife sent us the story on how he won the Baja event.

Joe won his second consecutive Baja 1000 when he crossed the finish line at the Tecate SCORE 2013 Baja 1000. This is his 3rd overall Baja 1000 win in the last 5 years. Team Lexus finished the race in 29 hours and 21 minutes. The only other Stock-Full Class truck to finish was Rod Hall who came across the finish line 4.5 hours after the Lexus.

Joe had a few challenges in the beginning as the GPS locked up so they ran the first 65 miles without it. Then their radio wasn’t working. They couldn’t hear the chase crew but the chase crew could hear them. Fortunately, the GPS suddenly started working on its own and the chase crew changed out the radio antenna at BFG Pit 1, which solved the radio problem.

The rest of the race was problem free and was a combination of rock crawling, maneuvering extremely narrow goat trails and getting swallowed up in 4’ to 5’ deep silt beds. Joe said it was the toughest, most challenging Baja 1000 he has competed in these last 5 years.

Only 46% of the 251 competitors actually finished the race. Team Lexus placed 43rdoverall which puts them in the top 40%. Joe Bacal is once again the points leader for the Stock-Full Class in 2013 SCORE International season.

We got a chance to interview Joe Bacal on this truck. Here is our interview:

Q: Often times, race vehicles strip out the entire interior to save weight and facilitate adding a roll cage — how much have you removed from the LX racer?

A: The LX was stripped completely inside. The roll cage was built and ties in from the back to the front, and includes the suspension mounts. The interior wood dash and leather was re-installed to make it as clean and stock as possible. I use SPARCO seats, and this is the first LX to have paddle shifters. 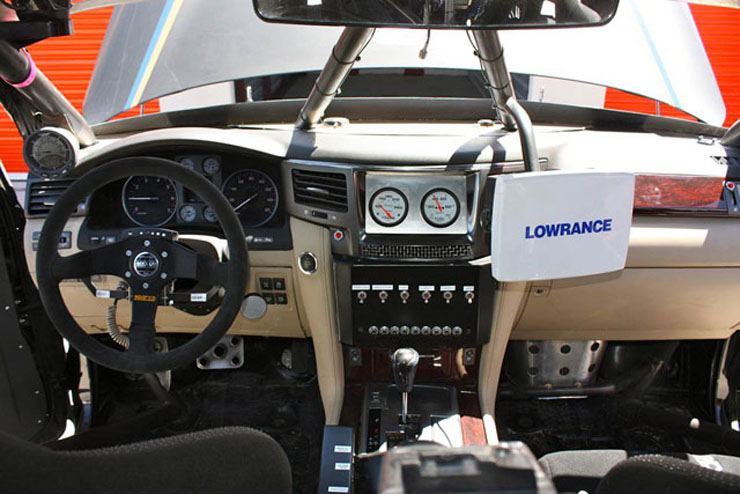 The interior isn’t like any Lexus we have been in!

Q: What fuel is the engine running?

A: The same 92 Octane recommended for the standard Lexus LX.

Q: Has the engine been tuned or touched by TRD?

A: The engine’s completely stock except for a custom air intake that relocates a larger air filter into the passenger side floor for dust protection. We also had TRD engineers remove 65 lbs. of wiring and sensors that were not needed. The original ECM computer was still used however to stay in the class rules.

Q: What add-ons or enhancements have been made?

Q: What can you tell me about the suspension setup and settings? What challenges have you had in terms of tuning the system?

A: We utilize all stock suspension parts for instance upper and lower A-arms, bushing and the solid axle 5 link in the rear. All bushings are stock. The only change in suspension are the actual shocks. 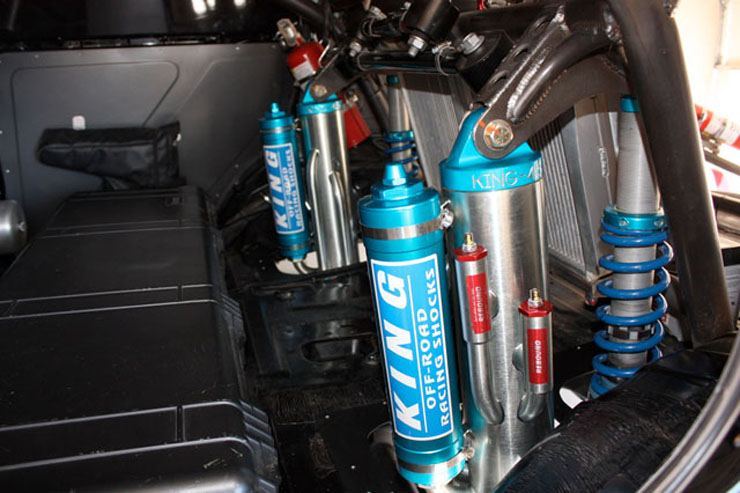 These shocks would make any offroader jealous.

We are sponsored by King Racing Shocks, and the front runs two King Shocks per wheel. I have mounted a 3.5” coilover that passes through the upper mount (cut out) into a higher custom shock mount location that ties into the roll cage. the secondary shock is strictly a 3.5″ triple bypass. At the full droop and full bump, I get almost 15” of usable travel. This is possible with the stock arms, 4WD half shafts, and stock steering components.

As for the rear suspension, I punched through the bed floor, and from eye to eye, the top and bottom shock bolt mount is 47” in length at full droop, with the King Kong 4.5” triple bypass. The rear coils have been removed, and a 2.5” air shock coilover holds up the LX in the rear. The rear suspension also has close to 15” of travel, but does not utilize air bump shocks front or rear due to the stock full class rules.

When it comes to the tuning, I work closely with Geiser Bros Design and Development out of Phoenix, along with the tuning guys at King Shocks. We really did our homework, and Geiser Bros did their magic on the entire build. We did a lot of static suspension tests with the 37” BFGoodrich KRT race project tries and even added a 2.5” body lift to get more up travel.

The process of tuning the vehicle is pretty complex, since I do a lot of the work on pavement. I try and dial in the front and rear balance first, so the vehicle is predictable on yaw response and is linear. This is key once you drop it in the desert. The compression settings are a bit soft, so I can utilize all of the suspension stroke but crank in some rebound to keep it flat. This LX570 is amazing at speed hitting the bumps.

Q: Has fuel economy been a problem or an issue you have had to work around?

Q: Have you had any electrical issues with it?

A: We did when the vehicle was first built. LX went into “Limp Mode” for 3 races, which cost us the Championship last year.

Q: How does your race vehicle compare to other vehicles in the series? Are you faster, better able to handle curves or technical sections? What the relative strengths and weaknesses of this truck?

A: We are a serious competitor. I think the Ford teams are all hard to beat, so every race anyone can win. One major strength for the LX 570 is the fulltime 4WD system, the center diff lock, and the rear air locker. I also think the suspension is a key advantage running the double wishbone front and 5 link rear for high speed rally type roads.

Q: What have you learned about Lexus and their development process as a result of this project? Are Lexus engineers out in the field taking readings and testing things?

A: I think I am a little bias on this question. After being involved on many projects over the years and working and seeing the plants in Japan, Toyota has impressed me with the detailed precision that goes into each vehicle.

Lexus normally does not have staff join the races and do testing. My team handles the prep and testing, but I do have many Lexus members help on chase and logistics support. These guys are essential, not only as co-drivers, but with how they know this vehicle inside and out. I have many friends from my Toyota days who have been with me from the beginning.