The 2009 Chevy Silverado, “America’s Best Truck” is getting a run for their money with the new Toyota Tundra on the market. The new Silverado has select improvements that give it a segment topping fuel economy rating, a 6.2-liter engine, and locks on the rear wheels to reduce wheel spin. It now has a 6-speed automatic transmission, compared to the 4-speed on the last model. The technological changes are included in the interior. These include a New Version of OnStar, XM Traffic Flow, and Blue Tooth connectivity.

Yes, that’s a lot of cool features, but most of them come only in the more expensive Crew Cab package. Toyota uses Genuine Toyota Parts to include more advanced features for a lower price than most dealers. And of course, the genuine Toyota parts 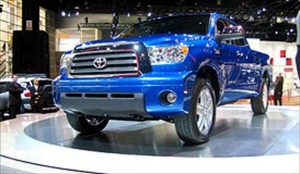 make all Toyota cars have a higher and better quality. The Toyota Tundra has a DVD navigation system, and it provides audible and onscreen instructions. These features are included and don’t require a monthly subscription, unlike the Silverado, which requires an $18.95 monthly payment.

Again, the Toyota Tundra has knocked out all other trucks in its class as it climbs to the top of the chart. The safety features, the technology differences, and the better gas mileage make this truck a top pick for anyone looking for a heavy-duty vehicle powered by heavy-duty parts. And of course, genuine Toyota parts outlast all other brands, so your truck can withstand even the toughest conditions.