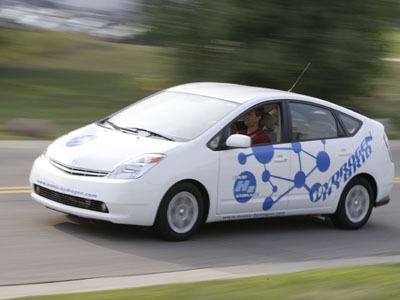 Toyota Hydrogen Vehicles May be the future of Transportation

Hydrogen fueled vehicles have long been the automotive maker’s dream. Hydrogen, element 1 on the periodic table, is the same material that fuels massive stars and our sun, so naturally engineers have long been trying to harness this immense untapped power. The problem, however, is not that the technology doesn’t exist, it’s just too expensive. Any attempt to prototype a hydrogen fueled vehicle has resulted in a million dollar price tag, which is obviously not quite realistic for globalization. Over the last ten years, Toyota has been chipping away at this price tag, finding new and innovative ways to cut cost while keeping quality in their Toyota Parts, and at this point hope to unveil a sedan-sized retail vehicle for about $50,000! Compared to the turn of the century, that is 90% lower than estimates made by other automotive companies. Hydrogen fueled vehicles would produce virtually no toxic emissions: the only tailpipe exhaust coming out of a Hydrogen vehicle is H20 (water). They are twice as efficient as conventional gasoline vehicles, and are nearly as quiet as electric vehicles.

Bloomberg news reported on this astounding information, and received an interview from Yoshihiko Masuda, Toyota’s managing director for advanced automotives. In the interview, Masuda stated “The first model will be a sedan with driving range equal to a gasoline-powered car, with some extra cost.” This means that the hydrogen car will defeat many problems electric cars have run into in the past. Instead of just a city-commuter car, it will be able to travel on interstates, make those family vacation trips, and not have to be recharged every 100 miles. Bloomberg also reported “our target is, we don’t lose money with introduction of the vehicle,’ Masuda said in Torrance, California, where Toyota’s U.S. sales unit is based. ‘Production cost should be covered within the price of the vehicle.”

So, how does an automotive company manage to cut down $950,000 per vehicle? It’s all in the platinum. Platinum, one of the rarest metals on earth, acts as a catalyst in hydrogen-powered cars. It speeds up reactions, which allows hydrogen fuel cells to yield high amounts of energy. Toyota, in its research and development, has found ways to cut back on Platinum use in it’s Toyota Parts, which extremely cuts back the price of the vehicle.

While hydrogen fuel cell powered vehicles may seem like a good idea, there are many challenges for that end of the industry. While hydrogen is one of the most abundant elements in the universe, it does not occur in a pure form very often in nature. More often than not, Hydrogen must be extracted from other elements, such as methane. This process, as you can imagine, produces greenhouse gases as well. So, in order for Toyota’s extreme innovations, the infrastructure of the hydrogen-producing industry must be upgraded to house the hydrogen usage Toyota’s retail vehicle would use.

Toyota expects to have this Hydrogen vehicle showroom ready in 2015, after further price reductions.