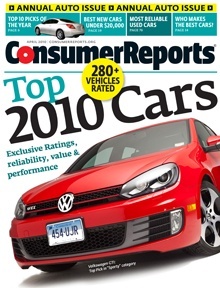 The April Cover of Consumer Reports

In the April issue of Consumer Reports, readers of the largely popular and influential magazine can see a list of the top ten cars of 2010 in ten categories. Over the years, this list has become a big honor for the winners, and the list can usually show who has wowed the consumers. This year, the top ten list included two Toyota vehicles: the 2010 redesigned Prius, which won in the “Green Car” category, and the Lexus LS 460L, which came out on top in the “Best Overall Car” category. This is a huge honor for the company, and it shows that Toyota still stands for quality vehicles.

In the last couple years, the Prius has always been at the top of the fuel efficiency group. This year, with the added solidity and upgrades that went into the 2010 model, Toyota guaranteed its Prius would come out on top. For the seventh year in a row, the Prius’ 44mpg clenched victory in the Consumer reports top ten.

The Lexus LS 460L is a vehicle that features all the best options in a luxury sedan. Some of its more prominent features are a sleek navigation interface with live traffic capabilities, a music storing hard-drive, and a self-parking system. And that’s just on the inside. Under the hood, the 460L boasts a 4.6 Liter V8 engine that provides 380 max horsepower, AWD, and, of course, super low emissions compared to some of its competitors. In the review, the Toyota parts in the Lexus LS 460L received a staggering 99 out of a possible 100 points.