As many Toyota owners know, several Toyota vehicles have been put on a recall list, because of rare but serious unintended acceleration. In a press release on Monday, Toyota announced they had found the exact issue that was causing the sudden loss of control.

“Nothing is more important to us than the safety and reliability of the vehicles our customers drive,” said Jim Lentz, president and Chief Operating Officer, TMS. “We deeply regret the concern that our recalls have caused for our customers and we are doing everything we can – as fast as we can – to make things right. Stopping production is never an easy decision, but we are 100% confident it was the right decision. We know what’s causing the sticking accelerator pedals, and we know what we have to do to fix it. We also know it is most important to fix this problem in the cars on the road.” 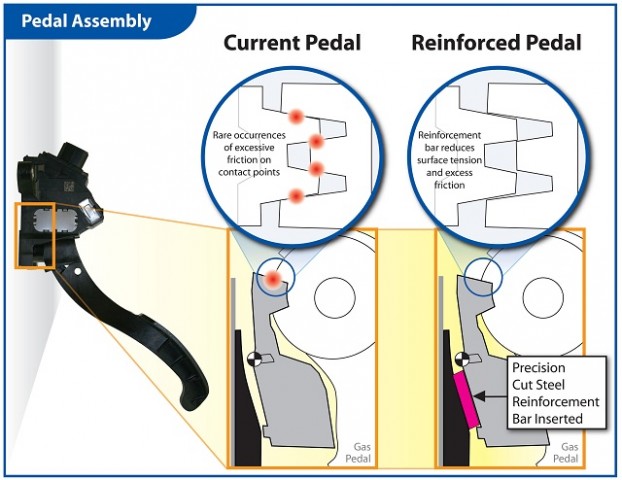 Inside the Pedal Recall

What has basically been happening is inside the recalled pedal, there was a piece designed to create a stable and solid feel. In the press release, they reported “The device includes a shoe that rubs against an adjoining surface during normal pedal operation. Due to the materials used, wear and environmental conditions, these surfaces may, over time, begin to stick and release instead of operating smoothly.” In layman’s terms, the piece was produced a fraction of a degree too small, and the resulting friction would cause the accelerator pedal to “stick”. As you can imagine, this kind of issue has been greeted by seriousness and very swift actions on Toyota’s part.

Toyota vehicles included in the recall are:

Also at the Press conference, Toyota announced they would cease production of the recalled automobiles starting this week. This will ensure that no more defective vehicles get on the road, and ensure less hassle for their loyal customers. This extremely rare action is usually reserved for the most important issues where speed and effectiveness is extremely necessary.

Yesterday, on Feb. 2, 2010, parts began to arrive at dealerships that would fix the acceleration problems several vehicles have been experiencing. The repair is estimated to take an hour and a half, so in that short time, your Toyota vehicle will have the defective part removed and replaced with quality, Genuine Toyota parts. During repair, dealerships will install a small, reinforcement bar that will stop the unnecessary friction in the pedal.

If you experience this rare happenstance, you are advised to pull over to safe area, and then, when possible, relocate your vehicle to your Kansas City Toyota Dealer where they will fix the issue quickly. If you are already aware of a problem, because of the many repairs needed, it would probably be smart to make an appointment for the repair.

To see a full copy of the press release, head on over to the Toyota Pressroom!