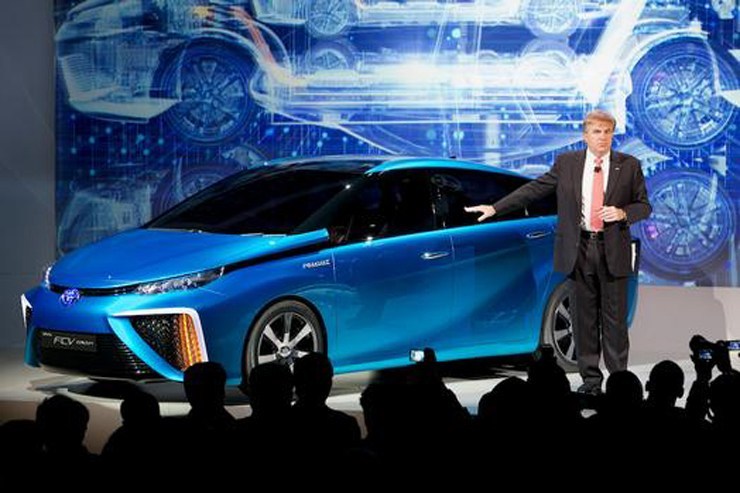 On the stage at the 2014 CES show were two Hydrogren fuel-cell vehicles. One was the FCV concept which showed what a four-door, mid-size sedan would look like in Radiant Blue. The other was the camouflaged protype that has been used for extensive testing and on-road testing throughout North America for more than a year. Toyota says that the protype “has consistently delivered a driving range of about 300 miles, zero-to-sixty acceleration of about 10 seconds, with no emissions, other than water vapor. Refueling of its hydrogen tanks takes three to five minutes.”

“We aren’t trying to re-invent the wheel; just everything necessary to make them turn,” said Bob Carter, senior vice president of automotive operations for Toyota Motor Sales (TMS), U.S.A. Inc., at the opening of CES, the world’s largest trade show, according to a press release. “Fuel cell electric vehicles will be in our future sooner than many people believe, and in much greater numbers than anyone expected.

Hydrogen works beautifully with oxygen to create water and electricity and nothing more. For years, the use of hydrogen gas to power an electric vehicle has been seen by many smart people as a foolish quest. Yes, there are significant challenges. The first is building the vehicle at a reasonable price for many people. The second is doing what WE can to help kick-start the construction of convenient hydrogen refueling infrastructure. We’re doing a good job with both and we will launch in 2015.”

This unveiling has been 20 years in the making according to Toyota. They say they have spent a massive amount on R&D to improve the fuel cells and make them cheaper to build. Also, there have been a series of prototypes in the past 11 years that have logged millions of miles in North America. All of this has lead to a 95-percent reduction in the cost of the powertrain and fuel cells for the vehicle that will be launched in 2015 versus the first prototype in 2002.

The FCV concept is quite an engineering achievement with the size and weight of the powertrain system going through a significant reduction since 2002. Toyota says the car will have a power output of more than 100kW which means it could be capable of powering a house for a week.

“There’s no doubt, that the success of this technology will depend less on the genius of the car, than on the ownership experience,” said Carter. “Cost is one thing, but convenience is another.” 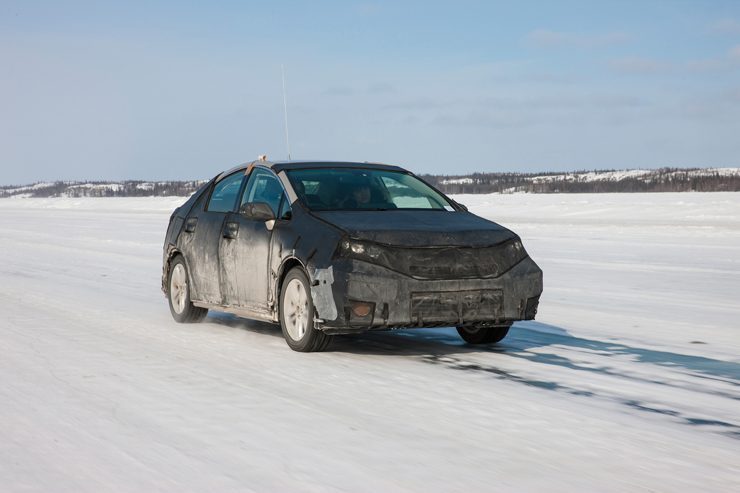 Toyota has unveiled its Hydrogen fuel-cell prototype, calling it the car of the future. Are you convinced?

One of the big questions with any new fuel technology is the availability of fueling stations. Toyota says the vehicle will be initially launched in California and they are currently working with the “University of California Irvine’s Advanced Power and Energy Program (APEP) to help map out potential locations for new hydrogen fueling stations.”

APEP developed a model using a variety of data including vehicle ownership from R.L. Polk of hybrid and electric vehicles, traffic patterns, population density, etc. The model also assumed that owners would want to reach refueling station within 6 minutes.

Based on this model, APEP was able to determine that there would be a need for 68 station sites for the San Francisco Bay area and Silicon Valley, as well as Los Angeles, Orange and San Diego Counties. These stations could serve an estimated 10,000 fuel-cell vehicles.

The funding is in place according to Toyota and it is just a matter of time before the infrastructure is built.

What do you think? Is a fuel-cell vehicle really the car of the future?