Unfortunately, according to an AAA study, owning and maintaining a new sedan will rise in the U.S. by 2 percent – 1.17 cents per mile – in 2013. The leading cost increase is maintenance. 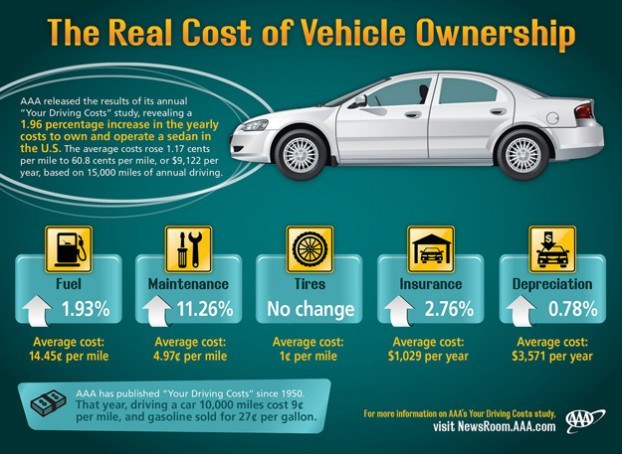 Each year, AAA collects real-world data to determine the 5-year (75,000) cost of driving a new car. The study looks at a variety of factors like “annual cost of fuel, vehicle repairs, insurance rates, taxes, license fees, rates of depreciation and average finance charges,” according to a Kickingtires.com story.

“Many factors go into the cost calculation of owning and operating a vehicle. This year, changes in maintenance, fuel and insurance costs resulted in the increase to just over 60 cents a mile,” John Nielsen, AAA director of automotive engineering and repair, said in a statement.

AAA breaks down the cost increases into these categories:

Putting this into perspective, it now costs 60.8 cents per mile to operate a car or $9,122. Compare this to the first study done in 1950 where the average cost was 9 cents per mile.