2014 Tundra: Why You Should Get It - Toyota Parts Blog

At the Chicago Auto Show in February, Toyota unveiled its redesigned 2014 Tundra pickup truck, the first major redesign since 2007. 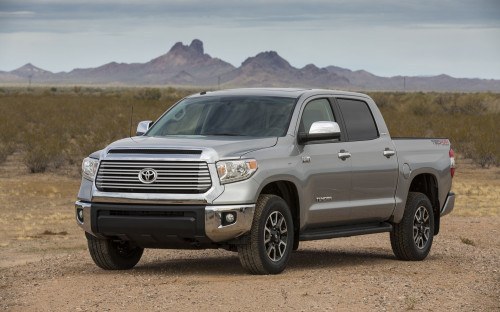 According to Toyota, the new Tundra features chiseled exterior styling and a fresh interior design. PickupTrucks.com says there are no major structural changes to the frame or chassis.

What you’ll probably notice right off is the new front-end grille. It has a more aggressive look than previous generations. The grille is wider and taller. The front-end bumper features a three-piece design, which should make it cheaper to replace when purchasing Tundra parts from a Toyota OEM parts dealer.

Toyota also included an integrated spoiler as well as a new rugged truck bed and tailgate. The back bumper is also a three-piece design, which should make replacements cheaper.

When you get inside the 2014 Tundra, you’ll notice that access controls are easier to reach when compared with previous generations. The seats have also been redesigned to improve ventilation. CrewMax rear seats can also be folded for extra space.

One new optional feature that many may like is the blind spot monitor and rear cross traffic alert features. This is the first truck in its segment to offer such features.

So when is the new Tundra available? Toyota says it should hit dealerships sometime in September 2013.

What do you think of the 2014 Tundra? Leave your comments below.