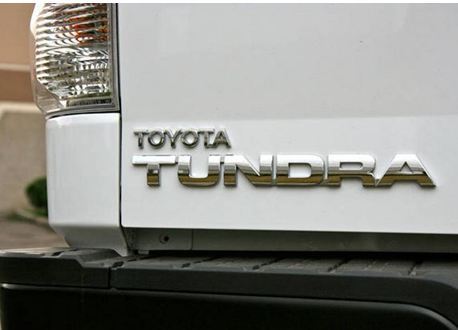 The new 2014 Toyota Tundra is going to be unveiled at the Chicago Auto Show this month!

We’re excited to see what Toyota has in store for the new truck. Based on what we’ve heard, we believe this is going to be the best Tundra yet! In fact, we think it’s better than other new full-sized trucks. This includes the Ford F-150.

Here’s why we think the 2014 Tundra will be a smashing success.

1. Fuel Economy Improvements – With tougher government fuel economy standards nearing, you can probably expect better fuel economy with the new Tundra. When it comes to improving fuel economy, no one is better at it than Toyota. The automaker has led the way in hybrid technology and other fuel economy improvements.

2. Larger Front End – From the 2014 Tundra spy shots, it looks as though the truck may be getting a larger front-end grille. Based on the photos, it appears like the overall shape of the Tundra will remain the same. However, the front-end grille and headlamps seem to be much different. If this is the case, it will follow a similar trend with Ford and GM.

4. Performance Improvements – Toyota has made a commitment to improving the performance of the Tundra. Hopefully, we’ll see advances in horsepower, torque and towing capacity that will allow it to tow two space shuttles.

5. Hybrid Technology – Rumors swirling around the web include the introduction of hybrid technology into the Tundra lineup in 2014. If the reports are true, this would be a major competitive advantage over GM and Ford. Ford has done well with its fuel efficient EcoBoost engine. A Tundra hybrid engine would blow the EcoBoost out of the water in terms of fuel economy.

What do you hope to see in the new 2014 Tundra? Leave your comments below. At Toyota Parts Center, we sell Toyota parts at great low prices! This includes Tundra parts as well as Tacoma parts. Visit our website at Parts.OlatheToyota.com .