Once again in 2011, more cars were sold in China than in the United States. General Motors announced that they were the world's largest automaker in 2011, but that particular point is open to debate.... 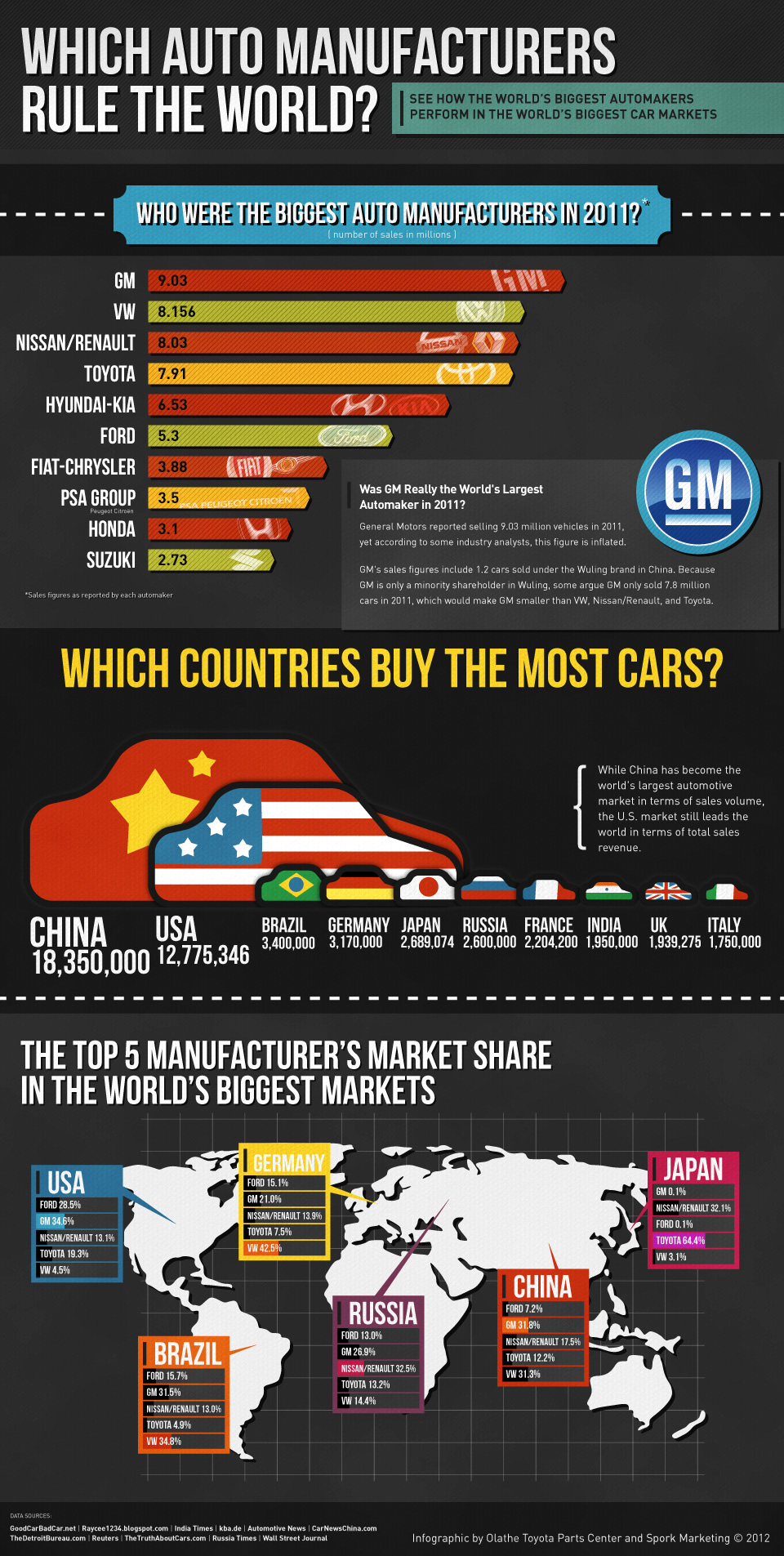 As you can see from the market share data in the bottom portion of the graphic, General Motors has successful sales operations in some of the most important automotive markets in the world. GM's leading market share in the United States and China (34.6% and 31.8% share, respectively), combined with their strong market share in Germany and Brazil (21% and 31.5%), make them a best-selling automaker around the world.

However, just as the graphic says, there is some debate about GM's claimed 2011 total sales figure of 9.03 million vehicles. Approximately 1.2 million of these sales are generated through Wuling Motors, a joint venture that is 44% held by GM. GM's rivals argue that since GM is a minority stakeholder in Wuling Motors, these 1.2 million units can not be attributed to GM. If these sales are taken away, Volkswagen, Nissan/Renault, and Toyota all posted larger global sales totals in 2011, meaning that GM would fall from first place all the way down to fourth.

Obviously, the whole question of determining which automaker is the world's largest is a bit academic, as sales are far less important than profits, quality, etc. Yet it seems clear that GM leadership values the title of "World's Largest Automaker" an awful lot - so much so that they're willing to manipulate their own sales figures to win.

Toyota, on the other hand, wasn't quite the largest automaker in the world in 2011, but they do enjoy dominance in their home market (Japan) as well as a substantial presence in all of the world's automotive markets. What's more, many of Toyota's best-selling vehicles are internationally recognized, such as the Hilux, Corolla, and Land Cruiser. Toyota also boasts the world's best-selling hybrid, the Prius, which enjoys wide popularity in Japan, the United States, and Europe.

This graphic may be embedded or referenced freely, but attribution to Olathe Toyota Parts Center with a link to either this page or https://parts.olathetoyota.com is required.

Sources and Data Used To Create This Graphic

All sales figures were collected directly from automaker press releases. However, country-specific sales data was captured from the following sites in no particular order:

Special thanks to all of the sites listed.

All efforts were made to develop an accurate infographic. However, some data sources were inconsistent when compared to one another, so we make no guarantee about the absolute accuracy of this graphic (although it is generally accurate). Infographic developed by Spork Marketing - contact Spork directly with questions about the infographic.